Boks botch it as Ireland make it look almost too easy 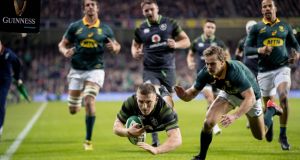 To say that Ireland won pulling away is an understatement. By the end, Ireland won almost too easily, and rarely has an Irish crowd come away from this ground so struck by a lamentable away performance. In the spate of on- and off-field rugby spats between the two countries, South Africa are certainly showing more fight in the latter.

The scoreline rather glossed over what had been something of a prosaic third quarter in particular, but it’s funny how often a superior team over the first 60 or 70 minutes then handsomely earns its rewards on the scoreboard.

Whatever about the final scoreline being a tad flattering, it’s fair to say that whereas the Boks botched quite a lot, Ireland were so clinical that they hardly left a chance behind. Indeed, about the only points not taken were Johnny Sexton’s touchline conversion to Andrew Conway’s try, and even that hit the post.

Possibly the most pleasing aspect of the game was the manner in which Bundee Aki, Jacob Stockdale and Andrew Conway all provided such energy and effectiveness, and, in addition, the impact from an Irish bench featuring another young home debutant in James Ryan and a full debutant in Darren Sweetnam. Every replacement made positive contributions. There were also tries for Rhys Ruddock, who just seems tailor-made for competing against the Boks, and Rob Herring. Even Joey Carbery contributed an impressive five-minute cameo, complete with touchline conversion.

Between them Aki, Conway, Stockdale, Herring, James Ryan, Carbery and Sweetnam had only a dozen caps going into this game, although, as Joe Schmidt noted afterwards, the spine of the team was quite experienced, when you think of Rory Best, Devin Toner and an all-Lions backrow and half-backs, outside centre and fullback.

There were so many high-calibre performances that it was hard to single them out, and it was striking how many players, such as CJ Stander, produced their best performances of the season to date. As expected, Conor Murray and Sexton bossed the show, with the latter giving the full repertoire, defending stoutly as he does and again providing a goal-kicking masterclass.

The Boks have now suffered record defeats to New Zealand and Ireland either side of coming within a point of the All Blacks. The latter now looks like more of a one-off. They brought a decent line-out, and retained possession reasonably well, and that was about it.

There was even scant evidence of the Boks’ famed physicality, allowing for one thumping hit by Francois Louw on the all-action Seán O’Brien

Credit has to be given to Ireland for stifling the Springboks’ running game, limited and largely predictable though it was, and certainly for stopping South Africa’s maul, which has been so potent in the Rugby Championship. On what was also a good day for the Irish scrum and line-out as well, the Boks suffered the indignity of being mauled over their own line for Ireland’s third try.

Ireland were content to let South Africa go through the phases, pushing up with relentlessly cohesive and fast line speed, chopping down the ball carrier on the gain line or even behind it, and then slowing down the recycle or forcing turnovers through the likes of Best, Stander, Seán O’Brien, Peter O’Mahony and Ruddock.

And that was only if the Boks didn’t cough it up or kick it away. Some of their basic handling errors, decision-making and execution, especially in their back play, simply did not meet the standards of a one-time superpower of the game. The manner Damian de Allende kicked away a three-on-one overlap in the first half – and badly at that – summed it up, as did Elton Jantjies and Siya Kolisi passing into touch beyond the hapless Courtnall Skosan.

The Boks’ left-winger also had a torrid time under Murray’s aerial bombardment and Conway’s chasing. Even so, the lack of cover, organisation or work-rate around Skosan when he failed to hold Murray’s up-and-under and Conway snaffled the ball on the first bounce to score touched from 30 metres was hardly credible.

Furthermore, the Boks’ limited kicking game was compounded by an almost non-existent chase. Carbery made more of an impression in five minutes than Jantjies did in almost an hour. Ireland also ruled the air, where Rob Kearney, in tandem with his wings, was as commanding as ever.

There was even scant evidence of the Boks’ famed physicality, allowing for one thumping hit by Francois Louw on the all-action O’Brien. But that had been preceded moments earlier by the sight of Iain Henderson barrelling through Eben Etzebeth, of all people.

That said, Ireland’s work in the contact zone showed, as is usually the case, how well prepared they were. The clearing out of the first two players after the tackled carrier was invariably ruthlessly efficient – retaining the ball in 71 out of 73 rucks (97 per cent).

Entering the last 10 minutes, the Boks were still going through their moves when Jacob Stockdale emptied Dillyn Leyds, and the superb set-piece move which followed a triple Irish substitution was beyond South Africa’s remit – Dave Kilcoyne, Seán O’Brien and Kieran Marmion shifting on off the top ball from Devin Toner to Johnny Sexton, as Aki and Robbie Henshaw ran decoy lines, to create the hole for Stockdale from Sexton’s inside pass. After carries from Conway and Stander, Ruddock side-stepped Franco Mostert to plough over.

After the mauling try, Ireland finished with a flourish, transitioning from defence into attack when Stockdale ran hard off a spillage by Jesse Kriel. O’Brien did his Tullow Tank thing, and when Sweetnam did well to recover Carbery’s crosskick, Herring covered a huge amount of ground to secure the recycle before James Ryan trucked it up. Ireland then had a perfect attacking shape as Kilcoyne pulled the ball back for Carbery, and good skip passes by Robbie Henshaw and Conway enabled Stockdale to finish in the corner.