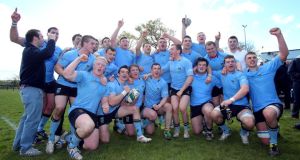 UCD began their rugby scholarship programme in September 1997. Brian O’Driscoll was an inaugural recipient (cutting short a sojourn in Ibiza to embark on those first tentative steps of an epic professional career).

“We were the first academy in the country, even before Leinster, guys like Brian, Paddy Wallace and Ciarán Scally were the first in,” remembers Bobby Byrne, the university’s current director of rugby.

Nowadays the two academies operate alongside each other on the Belfield campus with 13 of Leinster’s 23-strong academy donning the light blue of UCD in Division 1A of the All-Ireland League. When, that is, they are available.

John McClean was the initial director of rugby, succeeded by Byrne, who briefly made the sizeable leap into the professional ranks as part of Declan Kidney’s ill-fated Leinster coaching ticket of 2004/05.

“Going back a long time, when I finished playing, I coached in UCD for a couple of seasons then I coached the Irish students team and then I was involved in club rugby, coaching Terenure with Gerry Murphy for a couple of seasons and then the Irish schools team for four seasons and the Leinster schools for four seasons before that, initially with Vinnie Murray then on my own.

“After that Declan Kidney came in as coach of the Leinster side and asked me to come on board for the season.”

“I knew Deccie but I had never worked with him before. Only knew him through schools rugby, because he had been involved himself in the schools scene for a good period of time.”

The messiest of endings followed. Victor Costello was dropped for the pulverising 29-13 defeat as the media revealed that Leo Cullen and Shane Jennings had signed for Leicester. Then, in April, Kidney resigned for Munster and left Dublin before the campaign had concluded.

Asked about it all, Byrne replied matter-of-factly: “Declan had an opportunity to go back to Munster and that’s what he wanted to do. I suppose from that perspective it is a pity that it ended that way.”

Ironically, both men are ensconced in university life again with Kidney taking up the role as UCC’s director of sport last year.

Byrne also continues to immerse himself in the Leinster schools system with Gonzaga’s senior cup team. Doubling up as UCD first XV coach, almost 10 years later, the experience gained overseeing Leinster’s pack has served him well. “The professional game has moved on significantly since then, the facilities, and even the game itself has changed enormously. It was a terrific experience working with those guys. I personally benefited from it, I learnt so much from it.”

Irish under-20s captain Dan Leavy and Adam Byrne (a youths product who last season became the youngest Leinster debutant at 18 years, 8 months) have the raw materials to bring that number into double figures.

As Dublin University’s director of rugby Tony Smeeth noted, UCD’s 60 point top up, once a student matriculates to 320 points in their Leaving Certificate, allied by the presence of Leinster on campus has proved a massive draw.

“It has really tilted the field toward them,” said Smeeth.

“The best 10 players go there and the next 10 players tend to go there as well as good players want to be around the best players. It makes it hard to compete but we do compete.

“I don’t really know why [UCD] are doing it because the players they are targeting are Leinster players. They are basically committed to Leinster, as they should be.”

Despite noting the unavailability of eight players for the Young Munster league game in December, Byrne sees it differently: “The proximity of Leinster on campus is a big factor and has been a big bonus for us but we are striving to get the balance right.

“What we are actually doing is trying to help these guys further their education and pursue a rugby career, whether it is a professional rugby career or whatever. We give them as much academic support as possible In terms of flexible timetables, reduced workloads, providing an environment in which these guys can play rugby and also complete their degree.

“We look at these guys as students firstly, rugby players second. That’s the whole idea of the programme.”

Between two and three players enter the EAA every year with up to 10 rugby scholarships in total offered.

“The main difference with the EAA and rugby club scholarship is there is a 60 points allowance,” said Byrne. “Interestingly, of all the guys we have in the EAA only two have availed of that. It is not as big a deal as people think it is but if guys are trying to get into, say, physiotherapy, it is a major advantage.”


Fewer points
To gain entry to physiotherapy in UCD last year required 545 points but an EEA accepted scholar only needed 485 points in the Leaving Certificate.

“The vast majority of players we have here are not on scholarship at all,” Byrne added.

“Then again, we would have some players in our first team squad who have been in sub academies and haven’t quite made the next step but are exceptional players.

“Alex Kelly would be an example and Barry Daly would be another example of a guy who was in the Leinster academy for a period of time and didn’t quite make it. We’ve also had guys like David McSharry, who Leinster let go and pursued a career in Connacht and is doing reasonably well there at the moment. So the club game does have a role to play as a stepping stone for some guys.”

1 Owen Doyle: Creeping professionalism of schools rugby a threat to the game
2 Niall Quinn happy to step into the breach at FAI
3 GAA officials and referees brace themselves as new rules kick in, and this time it's for real
4 Scotland’s Finn Russell missed training after Sunday drinking session
5 Coco Gauff pulls off biggest shock yet by beating Naomi Osaka
Real news has value SUBSCRIBE