Defending champions set up final date with Lansdowne next weekend 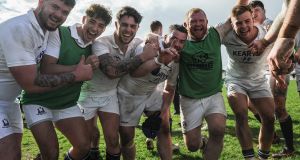 Cork Constitution players celebrate after their victory over Terenure College in the semi-finals of the Ulster Bank League at Lakelands. Photograph: Tommy Grealy/Inpho

With classy outhalf Tomás Quinlan notching an impressive tally of 17 points, Brian Hickey’s charges overcame the stubborn challenge of an ambitious Terenure side. Tries in each half by Robbie Carroll and Jake Swaine kept theDublin side in the reckoning, but thanks to key scores from Quinlan and replacement Evan Mintern either side of the interval, it was Con who prevailed.

Following a late tackle on number eight Luke Cahill on 15 minutes, Constitution broke the deadlock with a routine penalty from Quinlan. While this was an early setback for ’Nure, James Blaney’s men turned the game on its head with a superb try from centre Carroll, who used a lovely step to go over in the corner just past the first quarter.

Although Mark O’Neill’s touchline conversion was wide of the mark, the hosts were now hoping to build momentum for the remainder of the half. However, thanks to a six-point salvo by the reliable Quinlan, Con took a 9-5 cushion into the second period.

After O’Neill cancelled out another Quinlan three-pointer after the restart, Munster prospect Mintern entered the fray to put the Leesiders firmly in the driving seat. When scrum possession on the left was switched towards the far wing, the powerful backrower was in the right place to drive over the line.

Quinlan, Con’s 20-point from last year’s league final, converted his fifth penalty of the game in the 71st minute, giving the visitors a 22-8 buffer. Terenure were not prepared to go down without a fight, however, and winger Swaine was picked out for a simple finish in the right corner.

O’Neill added the extras to bring the deficit down to seven points, but despite losing prop Ger Sweeney to the sin-bin, Constitution held firm to set up an Aviva Stadium rematch with Lansdowne who beat them 32-12 in last Saturday’s Bateman Cup final at Temple Hill.