Time to recognise uncapped Irish internationals who tackled the Pumas 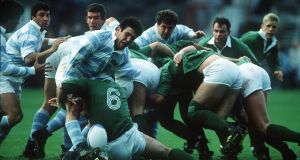 Ireland’s match against Argentina in 1990 was the first time that the IRFU handed out caps for games against the Pumas. Photograph: Billy Stickland/Inpho

What links the names Paul Traynor, Frank O’Driscoll, John Birch and Leo Galvin? All four played in rugby matches against the Argentina national side for which the Pumas awarded caps but Ireland didn’t and none of the Irish quartet managed to play in an ‘official test’ for their country.

The first time that the IRFU handed out caps for games against Argentina was in 1990, about a decade after the International Rugby Board (IRB), now World Rugby, sanctioned awarding caps for internationals against what was termed as ‘non board member’ countries.

New Zealand, Australia, Ireland, England, Scotland, Wales and France were the seven board members at that time. The English were the first of the four home unions to award caps for an international against the Pumas when they toured Argentina in 1981.

Ireland cultural and sporting links with Argentina date back to the 19th Century, and are particularly vibrant from a rugby perspective.

On Saturday at the Aviva stadium, the two countries will contest the Admiral William Brown Cup, a trophy first competed for in 2012, to honour a man revered in Argentina as a national hero - over 1,500 streets are named after him - and hailed as the ‘father of the Argentine navy.’

He left Foxford, Co Mayo as a nine year old for America before making his way to Argentina where his maritime prowess saw him rise to the rank of admiral. He has appeared on stamps in both Ireland and Argentina while there is statue dedicated to him at John Rogerson Quay in Dublin and a museum in his native Foxford.

Two former Pumas former players and coaches’ Rodolfo O’Reilly and Santiago Phelan can both claim Irish heritage but the Irish rugby team’s first direct link on a pitch was in 1952 when the national side undertook a tour of Chile and Argentina. It almost didn’t come to fruition because on July 26th, six days after the Ireland squad left Dublin, Eva Peron, the wife of Juan, the then president of Argentina, died.

The Irish side played the first of nine matches on tour against Chile - they won 30-0 - in Santiago on August 6th, before switching countries and playing a further eight matches. Captained by number eight, Des O’Brien one of several members of Ireland’s 1948 Grand Slam winning side that travelled to South America, Ireland drew the first test 3-3 thanks to a try from scrumhalf Johnny O’Meara; he won 19 of his 22 caps as Jack Kyle’s halfback partner.

The visitors prevailed 6-0 in the second test thanks to tries from UCD wing Michael Hillary - born in Malaya he won a solitary cap against England earlier that year - and Old Belvedere flanker Michael Dargan. Traynor, who played both internationals, the second in the company of fellow Clontarf man Patrick Lawlor, never managed to win a cap.

Ireland returned to Argentina in 1970, this time captained by Tom Kiernan boasting a squad that was littered with players who would go on to play for the Lions, including several of the most celebrated players in Irish rugby.

However they lost three of seven matches, including both games against Argentina, the first 8-3, when Ireland’s lone try scorer was Terenure number eight, Mick Hipwell. Ireland went down 6-3 in the second, Kiernan crossing for a try.

Frank O’Driscoll, Brian’s father, played inside centre in both matches against the Pumas, as did Ballymena hooker John Birch; neither managed to win that coveted cap. Other players in that Irish touring party who incurred a similar fate, albeit that they weren’t involved in the two matches against the Pumas, included hooker Paddy Madigan (Old Belvedere), scrumhalf Liam Hall (Garryowen), outhalf Henry Murphy (UCD) and flanker Padraig Cassidy (Corinthians).

The final member of the Irish quartet to miss out was Leo Galvin, when Argentina undertook their first tour to Ireland and played at Lansdowne Road on November 10th, 1973, a match the home side won 21-8.

The Roscommon man represented Connacht with distinction over three decades, including against the All Blacks and who was also honoured in the UCD team of the century, partnered Willie John McBride in the secondrow.

Talking to John Scally in his book 100 Irish Rugby Greats, Galvin admitted: “It would have been nice to get a cap but it was such an honour to play for Ireland and in donning the Irish jersey; and that honour is all I needed. It is nice to see that the jersey I wore that day is hanging on the wall in the rugby club in Athlone (Buccaneers).”

Galvin’s words perfectly encapsulate his achievement and those of Traynor, O’Driscoll and Birch. Irrespective of the lack of official recognition, they did play for Ireland and that should be acknowledged in defining their rugby careers.