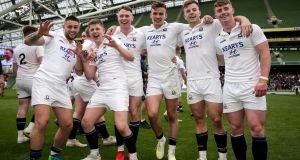 Cork Constitution players celebrate after their victory over Clontarf in the final of the All-Ireland League Division 1A at the Aviva stadium. Photograph: Laszlo Geczo/Inpho

Cork Constitution’s ruthless precision in taking try-scoring opportunities and the capacity to absorb the late withdrawal of their captain Niall Kenneally – his hamstring went in the warm-up – were the central tenets that underpinned their All-Ireland League Division 1A final victory at the Aviva stadium. Playing in a fourth successive final the club claimed a sixth triumph in an entertaining if protracted tussle.

Con’s head coach Paul Barr rightly singled out the contribution of young Alex McHenry. “I want to pay huge credit to Alex McHenry. We know that Alex is a quality player and we have what I think are three professional quality centres in Niall, Shane Daly and Alex.

“To be able to go into a game like this and compete as effectively as he did is a credit to the player he is and the man too. That was not an easy ask and also to replace someone of Niall’s stature in the group.”

Clontarf will wonder how they lost this match, albeit that they won’t have to search too hard for the answers. They were on the rough end of the officiating at times, lost their two starting props Ivan Soroka and Royce Burke Flynn, a situation that led to uncontested scrums and to the Dublin club having to go down to 14 players as a result, but they’ll need to examine the options they took or more pertinently take didn’t that cost them several try-scoring chances.

The opening 40 minutes was a curious affair in that Cork Con defied the typical rugby conventions, where possession and territory are required to dominate the scoreboard. They had very little of either, yet went in at the interval 14-10 ahead. They barely escaped the confines of their half but on the two occasions that they did they manufactured a brace a tries, both beautifully crafted and finished.

The first, on 11 minutes, came from an orthodox backline movement that was elevated by the contribution of Seán French; he broke through Jack Power’s tackle and a lovely finger-tip flick pass by McHenry to the supporting Shane Daly, who crossed unopposed.

The second seven minutes later came at a time when Con were a man down following the sin binning of centre McHenry and can be ascribed to the vision of number eight Luke Cahill and the predator’s instincts of left wing Rob Jermyn.

Cahill’s inside pass sent Jermyn scampering clear and the wing shimmied one way then another, before accelerating sharply on an arcing run that took him around Clontarf fullback Power; a fine individual effort. Aidan Moynihan converted both to nudge his side out to a 14-3 lead and despite existing on a pittance, possession-wise, Con’s opportunism was hugely impressive.

The Dublin club were finally rewarded with a try on 36 minutes when centre Matt D’Arcy took a quick tap penalty and forced his way over from close range. David Joyce kicked the conversion, which he added to an earlier penalty to leave Clontarf trailing 14-10 at the interval.

They survived excellent scrumhalf Angus Lloyd’s 10-minute sin-bin sabbatical shortly after the re-start within conceding any points and indeed tagged on a second penalty to make it 14-13. The game turned in an instant on 52 minutes, Clontarf sweeping into the Con half following a brilliant break from Power, only to cough up possession.

A clearing kick found no one at home in the Clontarf backfield. Jermyn won the race for possession and sent replacement scrumhalf Duncan Williams away. Despite Seán O’Brien’s excellent last ditch tackle, the TMO, McDowell, adjudicated that the Munster player had grounded the ball a nanosecond before his foot came down outside the touchline.

Burke-Flynn’s departure through injury soon after, meant not only uncontested scrums but that Clontarf had to withdraw a player, Seán O’Brien, and play the final 25 minutes or so with 14 players. Despite their gallantry, Clontarf just couldn’t quite muster a definitive line-break and as they tired, Con through outhalf Aidan Moynihan punished them, kicking three penalties in the last 10 minutes of the match.