Simon Zebo named at fullback for Munster’s clash with Cardiff 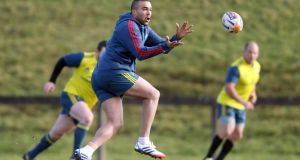 Simon Zebo training with Munster at the University of Limerick this week. Photograph: Donall Farmer/Inpho

In total coach Rob Penney makes nine changes to the team that beat Edinburgh in the Heineken Cup three weeks ago, with James Coughlan leading the side from number eight.

Zebo takes over from Felix Jones at fullback, while South African Gerhard van den Heever comes in for the injured Keith Earls on the right wing to make his Thomond Park debut.

Denis Hurley is named at inside centre in place of James Downey, while JJ Hanrahan and Duncan Williams form the halfback partnership.

Duncan Casey is named at hooker alongside international props Dave Kilcoyne and Stephen Archer, with Donncha O’Callaghan joining Dave Foley in the secondrow.

CJ Stander takes over from Peter O’Mahony at blindside, with Barry O’Mahony named at openside.

Leinster make 12 changes from the side that hammered the Ospreys for Sunday’s trip to play Zebre at Stadio XXV Aprile (kick-off 5.0pm Irish time).

The surviving players from that game are Jimmy Gopperth at outhalf. lock Mike McCarthy and openside Shane Jennings.

Leinster Academy players Sam Coghlan-Murray and Tadhg Furlong get a chance on the left wing and at tighthead respectively.

Zane Kirchner is named at fullback, with Darragh Fanning on the right wing, Brendan Macken and Noel Reid in midfield and John Cooney alongside Gopperth at halfback.

Michael Bent, Aaron Dundon and Tadhg Furlong form the frontrow, with Leo Cullen captaining the side from the secondrow alongside McCarthy. Kevin McLaughlin is named at blindside and Jordi Murphy at number eight.

Connacht make seven changes, with five of those coming in the pack, from the 64-6 drubbing away to Saracens for Sunday’s trip to Scotstoun to take on the Glasgow Warriors (2.0pm).

Outhalf Jack Carty has been handed his third start of the season by coach Pat Lam , wile Craig Ronaldson is named at inside centre.

There is a new frontrow of Denis Buckley, Jason Harris-Wright and Rodney Ah You, while Andrew Browne moves up from blindside flanker to join Michael Kearney in the secondrow.

John Muldoon switches from number eight to blindside, with George Naoupu coming in at the back of the scrum.