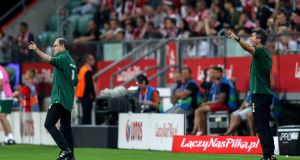 Whether Martin O’Neill and Roy Keane stay or leave won’t change the realities of football in Ireland. Photograph: Ryan Byrne/Inpho

During his stout defence of Roy Keane this week, Republic of Ireland manager Martin O’Neill joked that they’d had a quick chat about the latest family tiff “before Coronation Street”.

O’Neill uses humour like a shield. But it was probably the most arresting image of another fractious week for the Irish football fraternity: Roy and Martin glued to the box, enjoying a steaming brew and a few cheeky Rich Tea, escaping the madding crowd by following the fortunes of Liz McDonald for half an hour of pure gogglebox bliss.

They might have noticed that Liz’s ex, the gruff Ulsterman Jim, has made a reappearance on the Street after a long absence. That’s what happens in soap operas. Characters are introduced to add variety and spicy new storylines and then are written out – they move to Spain, join Holby City or meet grisly ends.

In the ongoing soap opera that is the Ireland football team, both O’Neill and Keane are deemed to be at the point where the script writers are wondering what to do with them – that it might be time to bring Mick McCarthy back to the Street.

During the week there was also further discussion about John Delaney’s role as CEO of the FAI and several despairing conversations about the fact that the players aren’t ‘coming through’. Then, everyone moved on.

In the major football countries, the international team is a reflection of the wellbeing of the domestic game. That has never been the case in Ireland, where the struggles of the League of Ireland stand in absolute contrast with general expectations for the international side.

Some football supporters are devotees of local football and work hard to coach and promote the game at local level whereas others care deeply about the Republic of Ireland football team without giving two hoots about Irish football.

They just aren’t League of Ireland people and prefer to spend their leisure time and money following the more glamorous events of the Premier League and by supporting the Ireland team on big international nights in Lansdowne Road or abroad.

Since Ireland qualified for its first major tournament in 1988, the persona of the manager has been central to events. Everything that has happened since has been a response to the unexpected revolutionary impact that Jack Charlton had on the international team.

There is no doubt that of all the Irish managers who followed Charlton, nobody poured as much soul and energy into the grassroots game as Brian Kerr. Anyone who was there on the day of his first official press conference was struck by the overwhelming warmth in the room.

Here was a local who had made it to the big job through perseverance and terrific youth coaching and no little managerial skill. Every time you see him on television now or hear his match analysis, you wonder why he doesn’t have a huge role within domestic Irish football.

Why isn’t he the guy they are using to join up the grassroots and the academies and the domestic league with the international set-up? How can the FAI afford not to use a resource like Kerr? And how many others like Brian Kerr are out there, brimming with energy and innovation?

Kerr’s term in charge of the senior team did not culminate in qualification for a major tournament. He was arguably unlucky but ‘Getting There’ has been the yardstick since 1988.

Like Charlton, the other managers who guided Ireland to major tournaments were from outside the domestic fold – McCarthy (World Cup 2002), Giovanni Trapattoni (Euro 2012) and O’Neill (Euro 2016). Those last two qualifications mixed a deluge of prosaic, low-scoring games along with a few improbably heroic results.

Pundits and management could generally agree on one thing: the players were committed if less than brilliant. Most people knew what the starting XI would be and how they would line out. The big tactical poser was whether to start Wes Hoolahan or bring him on after 65 minutes – and whether to substitute Robbie Keane after 75 or 80.

The Irish manager’s job has been very well paid over the past eight years. What can’t be gauged is the worth of the aura that Trapattoni and O’Neill, two figures with towering reputations, brought into the Irish squad. What can’t be measured is the influence of their personas during those fraught nights when qualification was earned.

Three years later, France were European champions while Ireland were stuck in the same cycle of near-qualification. Future Ireland teams will probably face France in an international match sooner or – hopefully – later. The mad thing is that whenever they do meet, the Irish public will sort of expect Ireland to somehow compete and maybe sneak a draw. Tradition dictates that Irish teams should always be able to put it up to the giants of the game.

Is that realistic anymore? In a podcast conversation during the week, John Giles, Brady and Eamon Dunphy discussed the apparent dearth of new emerging Irish talent. The trio have often despaired at the decline of street-football. And it may be easy to dismiss that image as harking back to a different time.

But Paris has become the global hothouse for producing the most sought after young players in football. Two years ago, Simon Kuper asked Paul Pogba why the Parisian suburbs had become the source of such fabulous talents as himself. “Because there is only soccer,” he replied. “Whether it’s at school or outside in the neighbourhood, everyone will play soccer. Every day it’s the ball. That’s all there is.”

That’s sounds precisely like the kind of scene to which Giles and Dunphy often refer. It gives a hint as to what Ireland is up against. It will be a small miracle if Ireland beat France in an international football fixture any time soon. And it’s not realistic to compare Ireland’s football resources to a world power like France.

But Ireland could aspire to be like tiny Iceland: the best version of itself, with a domestic league properly resourced and young players given the very best coaching and the best chance to succeed and a clearly defined structure and vision to help extend the tradition of a small football nation dominated by indigenous sport that has, improbably, still produced thoroughbred football players like Giles and Brady, Paul McGrath, Roy Keane and Damien Duff.

The O’Neill/Keane era should and will be allowed to run its natural course. Their record has earned them that right. And whether they leave or stay won’t change the realities of football in Ireland.

But the age of the big persona leading limited Ireland teams to improbable charges for glory has passed anyway. The next 10 years should be about investing in the local game and in the next generation of players. It’s time to make the system the priority, rather than the personalities, the rows and the walk-outs and what was or wasn’t said in the dressing room.

It’s time to try and fix the actual show rather than just constantly bring in new and returning characters.