Seán Moran: GAA need to apply themselves better to the role of colleges 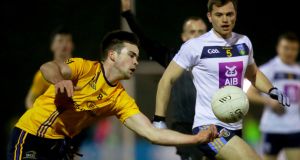 Billy Morgan has been around the Sigerson Cup for a long time, his association stretching back more than 50 years to the two medals he won with UCC in the 1960s. This decade he has trained two more winning teams for the college’s roll of honour.

So when he said last April that he was looking at an existential crisis for the third-level competition, his perspective couldn’t be lightly dismissed. Morgan was a core influence on Cork’s golden age in football and a key participant as his club Nemo Rangers became the most successful in football history.

Yet he was still worried for the colleges.

“I think the Sigerson and Fitzgibbon are marvellous competitions. There’s a vast tradition there and it’s a breeding ground for inter-county players. As well as that, there’s a lot of money being invested in sport in the universities.

“If the Sigerson and Fitzgibbon competitions are demeaned and it goes down to practically a junior competition that you don’t get the inter-county players playing in it, what are the college authorities going to do?

“They’re going to give that money to other areas – rugby, soccer or whatever. They’re not going to spend that much money on a junior competition. I think it’s very, very important from a lot of points of view that the Sigerson and Fitzgibbon Cups are maintained.”

Most coaches will tell you that they are just glad to have their county players turn out for matches, never mind turn up for training

That warning came back into focus in the past week or so with another high-profile clash between club and college fixtures, as the All-Ireland club championships clashed on the same weekend with the Sigerson semi-finals. There’s no handy way out for a college coach. Either you leave your player with his club, as UCD did with Liam Silke, or you accommodate both, as is the case with the NUIG-UCC match, pushed back by 24 hours, and players have to take the field twice on successive days.

How does all of this relate to Morgan’s misgivings?

Increasingly, it appears as if Croke Park is running out of patience with the third-level sector in that it has been left to survive an increasingly hostile environment without intervention.

The Fitzgibbon and Sigerson seasons are so restricted that they occupy only a few weeks, but that, it appears, is still too much of an intrusion into other activities. Most coaches will tell you that they are just glad to have their county players turn out for matches, never mind turn up for training.

There is a problem. All-Ireland senior club championships, national leagues and Fitzgibbon or Sigerson are all elite competitions contested by many of the same players.

Solutions haven’t been easy to come by, with the national league schedules compressed into so tight a space that there is no spare time. Twenty years ago half the football league fixtures had been played before Christmas. A knock-on effect is that there aren’t handy, “hurling only” weekends, which makes the clash with club semi-finals more likely.

There has been a great deal of talk about getting the club championships back before Christmas and removing that issue. Players overwhelmingly prefer the idea of playing out the championship as soon as their provincial finals are over.

The current schedules would facilitate that. All-Ireland finals have been brought forward by a couple of weeks and the purge on replays means nearly all matches are capable of being decided on the day. It would at a stroke remove the conflict.

Last year’s Sigerson-winning UCD manager John Divilly said in an interview with this newspaper that players who want to commit to their colleges for the few weeks of the competition should be ring-fenced from inter-county involvement, playing and training.

There are inter-county managers who value the experience players get in Fitzgibbon and Sigerson and those who don’t. Already there have been moves to reform the third-level environment. Freshers can’t, for instance, play in the main competitions. The traditional weekend format has been changed so that the final stages are more spread out.

It would be wholly reasonable to enforce by rule the priority of college teams for their players over the few weeks that they are in competition.

These days, colleges can’t even count on getting players for their premier competitions if there’s a clash with the club championships.

Leave aside the traditional arguments about the camaraderie of the college game and the friendships and attachments that are lifelong within the GAA, as well as the administrative talent that has traditionally come through the third-level sector.

Morgan’s point is that if the colleges feel that they are no longer dealing with an elite pursuit, what motivation have they to continue to plough resources into Gaelic games?

The third-level sector is enduring a crisis of its own. With public investment in non-capital areas estimated to have halved in the past decade or so, it’s not as if they’re flush with cash.

Nicky English, Irish Times hurling analyst and a recent coach of UCD, has suggested that an audit be carried out on all the facilities that third-level institutions have provided for Gaelic games (including for the use of county teams) as well as the cumulative value of scholarships and other subventions. He reckons the figure is in tens of millions.

It would be useful if the GAA could have a clear picture of what’s at stake in the maintenance and support of what after all are the association’s oldest elite competitions outside of the senior inter-county championships.