Ronan O’Gara interview: ‘Joey Carbery has all the attributes’ 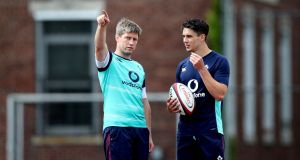 Remember, it was Ronan O’Gara who loaded the spiral into Joey Carbery’s kicking arsenal.

“The first few he struggled but after a certain amount of reps they just flew out there. Then the next few, wow! His capacity to learn . . .”

So remember, many moons from now, deep into a damp Irish winter, the value of these days in Soprano country.

“Because when you play in Ireland and it’s wet, you need that kick.”

O’Gara, in that measured Cork drawl, even placed the second highest compliment imaginable at the feet of Carbery before the will-o-the-wisp fly-half leaps into a test against the US Eagles without a safety net (the outhalf cover being to AIL standard).

“It’s probably a big statement but he could progress along the lines of Beauden Barrett,” said O’Gara, sitting in the Hudson ballroom of the Hyatt hotel as sunshine finally peaked over Manhattan’s distant skyscrapers.

“I think he has that different . . . I suppose it’s a little bit about growing up in New Zealand and being really comfortable on the ball. He gets excited on the ball, while a lot of people panic; he’s the complete opposite, he kicks into turbo mode.

The Barrett comparison only falls short of the man O’Gara sponges off at Racing 92 training.

“I think he’s the kind of player that the more difficult the scenario or picture in front of him the better solution he finds.

“He’ll find in test rugby he just has to play the other guys around him. But his capacity to learn – well, it’s not surprising when you have talent at that age and he has the application to get better. He has that in his drawer as well.

“It’s a case of when you play in Ireland and it’s wet you need that kick but his restarts are really good. He could add a lot to a team on that alone. He has big levers – the length of his legs, the capacity to kick through the ball.”

“Himself and Ringrose,” O’Gara continued, immediately warming to the special talent he has now witnessed close up.

“I haven’t seen much of him but he’s going to be some player. I think he’s (Ringrose) got a natural frame and that’s just going to get stronger and bigger and I suppose more compact within 24 months but the great thing about is he’s a ball player first and he sees space better than a lot of people and he doesn’t mind busting fellas either which is important in the 13 channel.

“But it’s the same with them all. Usually you can pick out a fella who’s full of himself. There’s none of that here. I think to have the opportunity to see that here every day you kind of go ‘Jesus, this team can grow so much’ because that’s going to be the key for Japan 2019.”

40 now – even Peter Pan grows old – O’Gara returns to Paris on Monday with a scribble-filled notebook. We ask to see it.

“In my back-pocket, safe, worth a few quid now.”

What’s he taking from the fortnight shadowing Joe?

We have time. O’Gara has had a direct line to Schmidt for a while. He also keeps picking the brain of Paul O’Connell.

“I speak to Joe regularly about stuff I’d struggle on, like if I had a rugby question I’d ring him for, like, on a four- or five-man [defensive line] who folds and who stays? And why would you switch the prop at the front of the lineout with the back depending on their speed to the first breakdown – stuff like that. It’s good to have that. I’d ring Paulie as well ‘cos he’s still very tuned into it.”

Back in Irish gear

This experience has been the good old days revisited, back in Irish gear, back on tour again, back running the seconds backline in training, tapping away as the constant crescendo of Schmidt’s orchestra unfolds before his eyes.

O’Gara on Schmidt was well worth rising to the 6am alarm call.

“It’s been a really unbelievable two weeks. I just think just how lucky the young guys are when they come in. That was me 20 years ago.

You don’t forget what it means but if you are out of a system for four years, all the great memories come flooding back.

“There are a lot of inexperienced players that are dying to learn. In a club game you would have, especially in the French club game, it’s very different. Some of them, their appetite to learn would be questionable.

“Here it’s, well, it helps when you have a coach like Joe to get a good message across. But you could not speak highly enough of the younger generation. You hear a lot of negativity about how the young kids have changed and they are into this and that. But I don’t see that from a rugby point of view. I see them very humble, very respectful, very decent young guys.”

This Ireland camp, Joe’s domain, is different from before, from the Eddie or Deccie eras, it demands a capacity to swallow heavy information whole.

“It’s just fascinating to watch Joe how he delivers his message.

“Anyone can have the information but it’s how he delivers his message and how he gets the most out of players, challenging them before training and re-challenging them maybe after training, but also complimenting them. I think it is important to encourage and he does that.

“But he has such energy, enthusiasm, bounce. It’s incredible. He’s backing it up for the last two weeks in term of how he drives it every single moment of every day. You think this guy is going to wane, it’s not possible for a man to have this energy.”

The point Schmidt hammers home is primarily by example; look how he works the week of a test match against a US Eagles team without a player who can claim more than 20 caps (the Cork flanker John Quill is their most experienced body).

“That’s one of his key messages. That’s what I admire. If it was the All Blacks tomorrow I don’t think anything would change.”

It remains a remarkable time to play rugby for Ireland. Those outside the circle complain about mentally drained players returning to the provinces.

“I would have been like ye, outsiders. I would have been interested in if it had become too structured, too programmed in every phase but I cannot tell you the amount of times it is stressed that you play what you can see, what is in front of you.

“If you’re five metres from your line and you want to dink a ball over, if there is space there, even if you don’t get the right bounce he will back the decision, which is really important as opposed to some people might go, ‘Ah Fuck, you didn’t execute that right.’

“There is a different thought process that goes into it. There is always the framework there, but what is really encouraging for me is that licence to play what’s in front of you is there. I think it is really crucial that you have the best of both options so you can pick out your power play or your system or whatever the team call is but if the picture in front of you changes, Go! And then it is up to other people to adapt to that.”

The wonder is if Schmidt ever halts training to question an individual error. “No. Because the intensity is phenomenal. He’d organise a coaches’ meeting and then the following morning you have a look at it but he has already seen it and come up with what he thinks. Then you might say ‘this,’ he might say, ‘no,’ but at least you’re given your opinion on it.”

Those players not fit for Schmidt’s purpose are discarded while others, like Simon Zebo and Tiernan O’Halloran, are being moulded into superior versions of themselves.

“I’d say it is tough on guys coming in at the start but, I was thinking about this before I came down to ye. There are only certain areas on the pitch where you can attack so a lot of his calls and processes become the same. It is not as if there is a new thing every time. That’s why I think players get used to playing for him.”