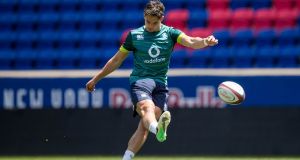 Spoken like a true disciple, Rhys Ruddock delivered the gospel according to Joe under searing Sun out in a desolate Harrison, New Jersey.

Population 13,620 and declining, this old manufacturing hive is silent. Beside the shiny new stadium are vacant, dilapidated buildings, abandoned car lots, a dust bowl in what feels like a town America forgot.

Until game day it seems. We are told the tail-gating will commence from early afternoon and that this 25,000 all-seater stadium will swell to capacity.

The forecast promises a scorching 86 degrees (31 Celsius) come the 5pm kick-off. Ruddock was pouring sweat after a hardly battering Captain’s Run when he stalled for the media gaggle in the shaded tunnel.

“Nothing has changed,” said the 26-year-old on the cusp of leading his country for the very first time.

“No matter where we’re playing or who we’re playing against. The fact that we’re in a different country, we’ve managed to prepare in the same way. Our week has been pretty much the same despite the travel. We’ve had a really good week of training. The intensity had to be high to get used to the conditions and make sure that we know what to expect.

Of course, everything has changed. But Schmidt drills this mindset inside the bubble. Ronan O’Gara, temporarily welcomed back into the fold, believes that Schmidt has behaved the same way this week as he did when Soldier Field in Chicago was conquered last November.

Nothing is the same. The 11 Irish Lions, will be suffering heavy bombardment in Christchurch or wherever the All For One bandwagon shifts them next. That prompted Schmidt to name five uncapped players in this match-day squad.

“It’s absolutely the most inexperienced squad we have sent out,” said Schmidt.

But this is the game to blood them. The US Eagles offer very little in the way of resistance with their squad stripped of leadership, Todd Clever and Blaine Scully, and power, Toulon’s Samu Mano and Saracens prop Titi Lamositele, to such an extent that Cork flanker John Quill is their most experienced man.

Quill, a decent club player with Dolphin, has 20 caps.

Outgoing coach John Mitchell – soon to take up the main job with the Bulls in South Africa – has also turned to the youngest of the Ryan brothers from Highfield stock. Paddy Ryan, whose mother is American, can win his first cap off the bench.

There is also AJ MacGinty to consider. The Blackrock boy is US qualified via residency and after finishing the season well for Sale, where he ended up after Connacht cut him loose despite a fine showing en route to Pro 12 success in 2016, this could be a career game for him.

“These are all prep games,” said MacGinty ahead of the World Cup ranking matches with Canada. “We are obviously going out to win but the two Canadian games are massive. We want to be the first US team to qualify for the World Cup as the top-seeded North American team. That’s been our goal since we came into camp with John Mitchell.”

Mitchell coached the All Blacks from 2001-03 having player-coached Garryowen in 1990 before overseeing the Irish pack in 1996 when Murray Kidd was in charge.

“Mitch is going to be a big loss but he has set benchmarks for us to aim towards,” MacGinty continued.

“The stuff we are doing now is the elite of the elite, to my knowledge. It is all the work being done by New Zealand’s Super Rugby teams and they are dominating the game down there. Our training and everything we do is based on what they are doing. We are looking to play a fast-paced game.

“This is our first game so it is hard to say but normally when it’s Ireland against America at the 50, 60 minute mark the Americans drop off and Ireland take over and finish out the game. I don’t think you will see that this time around.”

If the US do hold pace, and it seems unlikely when looking at the amount of amateur players in their team, then the weather conditions and the place-kicking of MacGinty versus Joey Carbery could come into play.

Still, the 22-point handicap looks enticing. There is enough about the young Irish pack to believe they will deliver. Ruddock, Jack Conan, Josh van der Flier and eventually Dan Leavy are expected to carry their excellent Leinster form into June.

Garry Ringrose should spark the stadium to life at some stage, especially off Carbery’s constant probing.

This is a running team. The conditions are perfect for Ireland to rout the Americans, entertain the curious and Irish ex-pats who journey the 15 miles on the Path train from Manhattan, and then escape to the airport for the long haul to Tokyo.