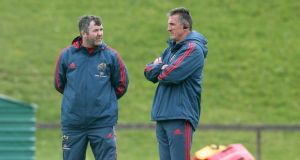 Munster coach Rob Penney has claimed that Connacht have an unfair advantage in signing big foreign imports because they do not face the same restrictions as the other three provinces.

And Penney, who leaves for Japan next month after two years in charge of Munster, questioned the value for Irish rugby of Connacht signing major international stars when there were players in the other provinces and in England looking for game time.

It is understood that Munster – and Leinster – were recently outbid for Chiefs centre Bundee Aki by Connacht, while this week Pat Lam announced the signing of All Blacks fullback Mils Muliaina.

“Having been here for a couple of years the frustration is around their ability to fund those new recruits. What’s it doing for Irish rugby? All the other provinces are obligated to have X amount or limited players at their disposal in terms of overseas or ineligible [for Ireland] players except Connacht who have obviously got a bit of a hand-up.

“They need a bit of a hand-up, but let’s keep it real as well. There is a lot of work going on in the other three unions, Connacht just seem to get it a little easier,” said Penney.

Connacht, who have operated at a significantly less budget than the other provinces since the advent of professionalism, are not governed by this policy although all signings, like the other three sides, have to be approved by the IRFU.

“If they’re able to recruit players at the level that they’ve signed, then I’d just wonder if it’s the right thing for Irish rugby. There are a lot of good Irish lads who are just not getting access, we’ve got some in our environment and I’m sure Ulster and Leinster have as well.

“There are guys in the English Premiership who would love to be playing in Ireland and they’re Irish eligible.”

Meanwhile, it has emerged that Munster captain Peter O’Mahony has undergone keyhole surgery on his second shoulder.

The Ireland flanker, who underwent an operation after being injured in the Heineken Cup quarter-final win over Toulouse, will be out of action until around October and it was decided to carry out keyhole surgery on his right shoulder while he is rehabbing the other one.

“He has had ongoing issues for a long time with the shoulders so he is getting both of them tidied up. He can get them out of the way now and he can hit early next season, post his rehab, and not have any issues with those for the rest of his career, that’s the hope,” said Penney.

He said that hooker Mike Sherry may be able to train with them before the end of the season as he completes his rehab from a knee injury, while lock Donnacha Ryan is continuing to recover from a foot injury.

Hooker Duncan Casey and winger Andrew Conway are nursing injuries from their win over Edinburgh last weekend as they prepare to play Ulster on Saturday.