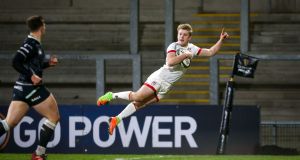 Roby Lyttle dives to score a try against the Ospreys which was later disallowed. Photograph: Matt Mackey/Inpho

Ulster achieved what had been expected of them by winning the contest, but their failure to secure the bonus-point victory, against an energetic Ospreys, looks to have potentially derailed their bid to overhaul Leinster at the top of Conference A.

Ulster, for whom Jacob Stockale returned for the opening half, were rattled from the off after Keelan Giles scored a first minute try, created by Rhys Webb’s charge-down on Ian Madigan and converted by Stephen Myler.

Toby Booth’s squad used this as a springboard to dominate Ulster in possession, territory and at scrum-time where Gareth Thomas was responsible for several first half penalties.

But for all their dominance, and Webb’s influence, the Welsh region - depleted by international call-ups - were unable to move the scoreboard onwards even with Ulster reeling and on the back foot.

With nothing going right for the home team, it seemed somewhat ironic that they got back into the game after Madigan had almost unknowingly blocked Tiaan Thomas-Wheeler’s attempted chip through with just three minutes left before the break.

Nick Timoney scooped the ball up and broke upfield from deep in Ulster territory before feeding John Cooney for what had seemed an unlikely way back into the game. Cooney’s conversion levelled the scores at half-time.

The score certainly revived Ulster who began the second-half with energy and belief though, again, their accuracy looked off in the opening stages with errors from Cooney and Lowry.

But Ulster battled their way back and after going to the corner twice, a driving maul saw Andrew dot down in the 54th minute.

Cooney again converted and Ulster led 14-7 with the momentum now behind them.

Two minutes after the hour and Rob Lyttle’s pass to James Hume was deliberately knocked on by Dan Evans and referee Sean Gallagher awarded Ulster a penalty try while yellow carding the Ospreys’ fullback.

However, Ulster failed to score any more points in the remainder of the game even though Lyttle got over three more times with each one ruled out.