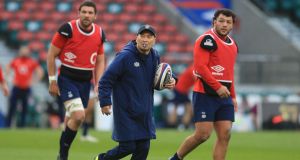 Saturday’s trip to Wales will be an acid test for Eddie Jones and England. Photograph: Adam Davy/Getty/AFP

Eddie Jones paused momentarily on Thursday when asked whether there was more pressure on the shoulders of England or Wales this weekend. In the good old days he would have smashed the enticing long hop back over the sightscreen, perhaps inviting his Welsh inquisitor to remind him of the scoreline when the sides last met in Llanelli in November.

On this occasion, though, Jones responded like an England middle-order batsman struggling to get off the mark in Ahmedabad. “Good question,” he replied, venturing only that the middle Six Nations Saturday is often “a make or break game” for every squad. It was a small but quietly telling snapshot of how much has changed since his squad were shouldering past New Zealand to reach the World Cup final 16 months ago.

Maybe there is a part of Jones that also recalls the time he took a seriously out-of-sorts Wallaby side to Cardiff in 2005. Australia squandered a 14-6 lead to eventually lose 24-22 and, five days later, a tearful Jones was relieved of his duties as head coach. He has not reached the same point with the English Rugby Football Union but, equally, he should probably bear in mind that Brian Ashton, the last England coach to lose to both Scotland and Wales in the same Six Nations campaign, ended up being jettisoned within weeks back in 2008.

It is precisely such occupational hazards that often prompt Jones to describe winning as the only currency in international rugby. It explains, he says, why he selects as he does and why his teams play the way they do. Make or break? If it proves to be the latter, at least he will be able to look his stubborn self straight in the eye and be reassured he did it his way.

Experience has also shown him how the blessed vaccine of a good away win can swiftly alter perceptions. Yes, Wales are unbeaten in their opening two games and gunning for a Triple Crown; a fixture that held few alarms a month ago is now increasingly fraught with difficulty. The lessons of history - the 21-13 loss in 2019, the 30-3 thrashing in 2013 - are all around. But cruise back over the Severn Bridge with a victory and, given the Covid-19 issues afflicting France, the horizon will look significantly clearer on Monday morning.

It should surprise no one, then, if England are stung into action and come rumbling out intent on proving a physical point. Look down their team list and, potentially, this remains a good side who, lest anyone has forgotten, have won the Six Nations in three of the past five years. Under Jones there has also been a tendency to come properly good at least once every tournament. Now would be the perfect moment to scatter the socially-distanced critics and justify all those long, lonely hours holed up away from their families in their Teddington “bubble”.

There are also, undoubtedly, long-established individuals playing for their immediate Test futures. There were more changes to the original cast of Dad’s Army than among Jones’s platoon regulars and here they come again: Captain Farrell, Sergeant Youngs, Corporal Daly - winning his 50th cap - and the one who only retains his place because his Aunt Dolly makes such lovely cucumber sandwiches.

That last part might be a slight exaggeration but even Billy Vunipola himself openly admits he has been “rubbish” lately and needs a good game at No 8.

Social media can be an unreliable gauge at the best of times but it is a while since middle England’s patience has been so sorely tested. Good luck to the hugely promising Leicester forward George Martin, just 19 and parachuted from nowhere on to a 6:2 bench, but Jones’s refusal to trust in-form Premiership players who do not fit his prescriptive template says more about him than them.

Could all this play into Wales’s hands? Fired up is one thing but England cannot afford to be overly enthusiastic. Both the hosts’ previous opponents have found themselves reduced to 14 men and the referee Pascal Gaüzère was in charge when England lost in Cardiff in a summer warm-up before the 2019 World Cup.

The untimely loss of Courtney Lawes is also potentially ominous. England wanted his lineout ability and ball-carrying presence and are now even more reliant on Maro Itoje, Kyle Sinckler and Tom Curry to drag everyone along in their wake.

It is interesting that only six England players have more caps than their opposite numbers; this is the most experienced starting XV in Wales’ history with 902 caps and, with George North reaching his century at the age of just 28, the desire to silence the noisy neighbours never fades.

Wayne Pivac will also be telling his players to take a leaf out of Scotland’s Twickenham manual: resilient and accurate up front but absolutely not afraid to try and play given the chance. The last six Six Nations editions of this fixture have all been settled by eight points or fewer; with Louis Rees-Zammitt looking electric out wide, there is no reason to imagine it will not be close again. If England kick poorly to Liam Williams or Dan Biggar, they will risk losing the initiative; nor have many in this championship outplayed Justin Tipuric and Taulupe Faletau in the back row.

In the end, though, this time-honoured contest is less about specific personnel than collective energy, genuine purpose and keeping calm when it counts. They may not be pouring out of city pubs and into Cardiff’s soaring cauldron but millions will still be glued to their screens. To date most have reached a blunt conclusion about England: they could do with fresh impetus at 8, 9 and 10, less mental clutter, more tactical imagination, less robotic adherence to blinkered conservatism. There were flickers against Italy but little in the way of clinical attacking execution.

And now here is the acid test, certainly in terms of England’s title defence. After 61 red rose games in charge - and seven wins in his nine fixtures against Wales - restoring a little public faith in Jones’s methods would also be handy. It feels like the pivotal 80 minutes of the head coach’s post-2019 tenure and that realisation could just prove decisive: feed off the extra pressure and it may yet be all white on the night. Who do you think you are kidding, Mr Pivac, if you think old England’s done?