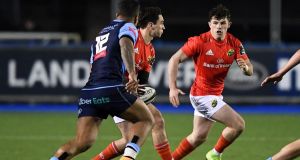 Baby steps and easy does it. Joey Carbery and Munster have been boosted by the gifted 25-year-old coming through his 17-minute cameo off the bench in Cardiff last Friday night unscathed, but Munster will continue to gently ease him back into action after almost 14 months on the sidelines.

To begin with, head coach Johann van Graan strongly intimated that Carbery will not be rushed back into Munster’s Guinness Pro 14 Conference B summit meeting with Connacht at Thomond Park next Friday night.

“He recovered pretty well in that game. We said all along that we will take it week by week with Joey. It’s firstly how he feels, then taking the guidance from the medical and athletic performance teams. There’s also the bigger picture, it’s going to be no good to anybody if we just throw him in straight away in terms of minutes.

“He’ll take his time over the coming weeks. The other thing I would like to say is that JJ [Hanrahan] has been playing really good rugby, Ben Healy has had some fantastic moments and then you’ve got two other guys pushing from behind in Jack Crowley and Jake Flannery that will get minutes in the coming months as well. Within that context, I’ll do what’s best for Joey, the team, and all the ‘10s’ involved.”

Reflecting on the “incredible journey” which Carbery has endured since his ankle issues first materialised in the World Cup warm-up win over Italy in August 2019, and restricted him to just two outings for Munster since that tournament, Van Graan said: “All credit to him that he’s kept his head in some very dark places.

“Most people give up when they’re about to reach success and that’s one thing about Joey, there was never any doubt in his mind that he would return.

“He had a lot of good support from Munster and the IRFU, he had excellent support from his team-mates that pulled him through and it’s a good testament for anybody that gets injured. We play a contact sport and you get injuries but one, he loves the game, and two, there was never any doubt.”

Also noting that Carbery was welcomed back with a “pretty good hit straight away” before nailing the touchline conversion which put Munster two scores clear of Cardiff, Van Graan maintained: “He’s still got a journey ahead of him now. He’s only played 16 minutes so we’ll manage his workload in the coming weeks and make sure we get him to a place in the coming months where he can play week-in, week-out for 80 minutes.”

Craig Casey, Andrew Conway and Chris Farrell have all been released by the Irish management this week along with Shane Daly, and should therefore all return to the starting XV against Connacht.

Roman Salanoa was removed due to a head injury in Cardiff and is undergoing the return to play protocols, as is academy lock Thomas Ahern after sustaining a head injury in training last week.

There was further encouraging news regarding another of their long-term absentees, RG Snyman, who posted a video of him back running for the first time since being sidelined with the knee injury he suffered inside seven minutes of his debut against Leinster last August.

“He’s had a very difficult time with him and his wife, Saskia, arriving in the middle of lockdown straight from Japan, going into their new home which they’d never seen, sitting for two weeks on their own in a new country, then only meeting seven or eight guys to train in his group way back in June or July,” said Van Graan, outlining the journey which his World Cup-winning compatriot has undergone.

Snyman’s return remains an unspecified time “between March and June”.

“With ACLs, some go quicker than others, and we will just make sure that we have his best interests at heart. Once he’s ready for a return, we’ll return him to the pitch.”

This week was also notable in the Munster camp by their second most capped player of all time, Billy Holland, confirming his retirement at the end of the season, and Van Graan paid the lock a fulsome tribute.

“I’ll always start with the person because this game that we play is about people and a phenomenal man. I’ve said that before, an incredible family man and a husband and father, friend to a lot of people and a real Munster man.

“I think respect is one of the words that pops up, as well as integrity, work rate and then example, the example that he sets for others and that’s what this club is about.

“Billy has never been the guy who plays 50 Test matches but he’s the guy who turns up every single week for this club and we’ve got to give credit in that respect.

“He’ll be sorely missed but like Billy and I discussed, it’s not about goodbyes, it’s just an announcement. We’ve still got a big season ahead of us, a Pro 14, some games in the Champions Cup and hopefully a Rainbow Cup so still a long way to go in this season for him, but incredible human being.”