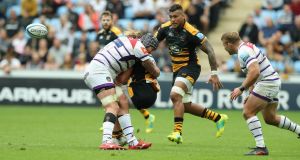 Will Spencer of Leicester tackles Tommy Taylor of Wasps at the Ricoh Arena, in Coventry, UK. Photograph: David Rogers/Getty Images

You can hear the referee say to the TMO during Leicester’s match against Wasps at the weekend that the tackle by Will Spencer was “high” and “was forceful”.

On the sideline Leicester’s new boss and former Ireland fullback Geordan Murphy was shaking his head in disbelief as the referee studied the replays and finally reached for his red card just before half-time in the Ricoh Arena.

The TMO agreed with referee Ian Tempest that Spencer’s high tackle was a red card offence.

The towering lock had moved on to Wasps hooker Tommy Taylor, who had just taken up the ball from inside. Standing seven inches taller, Spencer’s left shoulder then swung across and hit Taylor directly under the chin as Taylor was releasing.

It seemed more reckless than deliberate. But the force of the hit spun the Wasps player and he fell to the ground on his back.

Leicester went on to lose the match 41-35. But a frustrated Murphy, refusing to accept the decision, then poured gasoline on the fire by declaring that rugby has become too politically correct.

“The game’s gone too PC. That for me is crazy – it’s rugby. We need to start picking players under 5ft,” said Murphy.

“I see the game becoming very, very different to the game I played and loved. From my point of view, it wasn’t a red card.

“The TMO was pushing for a red card, saying have a look at it again. It’s a bitter pill when the TMO says we have to look at it when all the players, staff and coaches thought it was a good shot.

“It’s a collision sport and is a sport for all sizes, but what we’ll probably end up with is rugby league where everyone is the same height and shape.”

Murphy’s robust views are a counterpoint to current thinking. Barely a week has passed since one of his players, Ireland’s Dominic Ryan, announced in this newspaper his retirement from the game following a succession of head injuries.

But Murphy was absolutely right in one respect. It is not the game he played and loved. In 1997 the gifted fullback joined a Leicester squad that included Dean Richards, Martin Corry, Lewis “Mad Dog” Moody, Martin Johnson, Richard Cockerill and Graham Rowntree, none of them shrinking violets.

Moody, after he retired, said that he played through multiple concussions and treated them “as a joke”, as part of a squad that frequently became embroiled in midweek dust-ups as part of their character-building regime.

Murphy is not treating the incident as anything but serious, but his old-school “PC” comment suggests a game gelded by fashionistas overly concerned about injury and fixed on not upsetting or causing offence to anybody.

The remark will upset some people and groups who are looking at ways of downgrading the dominance of the physical element in the game.

Felipe Contepomi studied medicine in Dublin’s Royal College of Surgeons when he played with Leinster between 2003-09. He is not upset by the comment. But now an assistant coach for Leinster, the former Argentinean outhalf holds a different view.

“I don’t want to comment on his comments. It is his opinion,” said Contepomi on Monday. “For what I think, rugby is a great sport and we need to keep it as safe as possible.

“We need to judge around the welfare of the players and if that is the way they are managing it . . . I don’t know, we’ll see later on. It’s physical enough.

“Players are getting stronger, faster, leaner. It’s even hard to find space on the pitch. I don’t know why he said [it]. Maybe he has said a reason why. It is his comment. From my point of view, keep it as safe as possible.”

And while Murphy’s sarcasm at picking “5ft players” expresses a real outrage, his critics will point out that it also misses a central theme of the game– the all-encompassing duty of care.

For 6’10’’ players like Leinster and Ireland lock Devin Toner, who can be 12 inches taller than opponents, getting low is a work in required progress.

There will always be a disparity in size as long as there is a scrumhalf and secondrow playing, but Contepomi, agreeing with Murphy, already sees the size and shape of players becoming more homogenous across his team and positions.

“If I bring you all the 50 [Leinster] players, you might not be able to tell which position they are in because everyone looks the same,” he said.

Leicester secondrow Spencer will face a disciplinary panel on Tuesday, which is automatic after a red card offence. Suspension from playing begins at six weeks for a (mid-range) head hit.

It’s reasonable to believe that the outcome will not distract Murphy from his view that rugby has become PC.