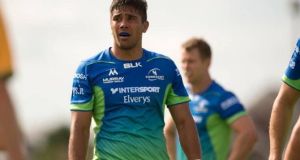 Jarrad Butler of Connacht. His side face a tough opening game against the Warriors. Photograph: Getty Images

New signing Jarrad Butler starts while recent Ireland training camp attendee Bundee Aki will be the centre of attention in many respects as new Connacht coach Kieran Keane gets his tenure off and running in competitive terms.

Keane will face his fellow New Zealand former colleague Dave Rennie, the latter taking over from Gregor Townsend during the summer. “It’s ironic that we face Dave’s Glasgow side in my first game in charge. They will be playing an open expansive style of rugby as will we.”

John Cooney’s move to Ulster and Caolin Blade’s injury means that Conor McKeon is named among the replacements. He played outhalf during his schools career, but the academy player spent a little over a season converting to the role of scrumhalf. John Muldoon starts into his 15th season.

Former All Black Lelia Masaga will make his competitive debut for the visitors, while at the other end of the scale 27-year-old centre and Scottish international Alex Dunbar will be making his 100th appearance for Glasgow.

This is a tough opening game for Connacht as the Warriors have caused them problems in the past, but based on the resources available to the respective coaches this might just go the way of the home side.