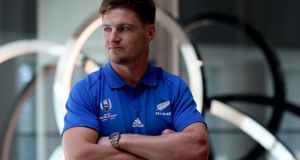 Jordie Barrett starts at outhalf for the All Blacks on Sunday. Photograph: Hannah Peters/Getty Images

Utility back Jordie Barrett will make his first appearance at outhalf for the All Blacks against Namibia in their Pool B clash in Tokyo on Sunday, while Brodie Retallick has returned from injury earlier than expected.

Coach Steve Hansen chose just two specialist outhalves in his World Cup squad in Richie Mo’unga and Beauden Barrett, who has been playing fullback in a dual playmaker game plan with Mo’unga wearing the number 10 jersey.

Hansen said prior to the tournament there was a likelihood that his utility backs -- including Jordie Barrett, Ryan Crotty and scrumhalf TJ Perenara -- could play the pivotal role in pool games against the tier-two nations.

Perenara will provide cover off the bench.

“Jordie can play multiple positions in the backline and we’re confident that he’ll responsibility well,” Hansen said. “He has all the skillsets required and we’re looking forward to seeing him play there.”

Retallick dislocated his shoulder against the Springboks in July and suffered nerve damage that he thought could keep him out of the tournament altogether.

The 2014 World Player of the Year, however, was selected in the squad on the expectation that he would be available for the knockout stage of the tournament, although the lock said he had hoped to be back for the last pool game against Italy.

“It’s great to have Brodie back,” Hansen added. “There’s been some great work done by not only Brodie but also the medical team. Obviously, Brodie is very excited to be in a position to be pulling the jersey back on.”

Captain Kieran Read was rested for the match with Sam Whitelock leading the side against Namibia in his absence.