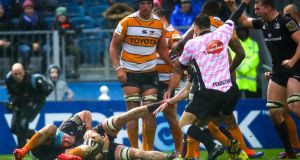 Leinster’s Will Connors scores a try as Ross Molony celebrates during the Guinness Pro 14 game against the Cheetahs at the RDS. Photograph: Tommy Dickson/Inpho

Leinster should derive considerable satisfaction from the nature of this victory, forged in filthy conditions of gale force winds and heavy, driving rain, one that is comparable with their finer efforts as a 17th consecutive win continued their unbeaten run in all tournaments this season.

The floodlights were required at the RDS for the early afternoon kick-off, Storm Dennis a menace in forcing the closure of the North and South stands as the safety threshold, a wind speed of 65 kilometres per hour was exceeded comfortably in gusts. The 7,967 who braved the elements were treated to a strikingly entertaining display from the home team that defied the physical challenges.

It didn’t initially appear as if that would be the case as there was little to enthuse about in the first 15 minutes, play bogged down by a morass of scrums, often reset, chewing up the clock. In this period Leinster players carried hard and straight but were easily repulsed by the Cheetahs’ muscular defence; that is until an appreciation that footwork going into contact could elicit space.

Number eight Max Deegan epitomised this shift in orientation and his lead was embraced by others like hooker Rónan Kelleher, Will Connors and Peter Dooley. Leinster head coach Leo Cullen said: “That bit of footwork, if you could get your nose through the contact as you were being tackled, there was that momentum.

“Even as you hit the ground, you got that extra metre. It is very hard to defend then. So, if you are patient with the ball in attack in those conditions, and your body height was good, you were getting the benefits of that. Our guys figured that out pretty quickly which as good.”

It was the central tenet to Leinster’s opening try on 20 minutes, Deegan’s footwork allowed him to step out of a tackle and get his side within a few metres of the line. From there, the home side, on a penalty advantage, engaged in a softening up process before Connors spun out of two tackles on the line to dot down.

Ciarán Frawley converted, kicked a penalty soon after, as Leinster settled into a playing rhythm that leaned heavily on their highly effective driving maul. The Cheetahs were culpable in their downfall through ill discipline, allowing their opponents regular access to the South African side’s 22.

Michael Bent grabbed Leinster’s second try with a one-metre plunge, his third of the season and then in first-half injury-time Rónan Kelleher’s barrelled over, the lineout maul once again the perfect platform. It was the hooker’s seventh try in the Pro 14 this season.

At 22-0 having played into the gale, the only thing up for dispute ahead of the second half was when, and not if, Leinster would manage the four-try bonus point. The answer was provided swiftly, three minutes after the resumption, Luke McGrath’s superb break, eventually culminating in a muscular finish from the excellent Rhys Ruddock.

McGrath was superb in varying the point of attack in an accomplished display, and along with Frawley the young halfbacks provided the team with intelligent direction. Cullen acknowledged: “Lukey makes that break, takes the [defensive] line on; he is that threat.

“Overall how he manages that close scenario, through that pick-and-go game you need in this wet weather rugby, and then when to play out of some of those drives as well. It is very easy to go that yard too far in some of those drives. Suddenly, you get held up when you should have played the ball out of it earlier. I thought that balance was good and Lukey managed the game well with Ciarán.”

Connors crossed for a second try on 50 minutes and afterwards would smile: “Do you call that a drought if you’ve never scored before?” Ross Molony won a lineout, there was a nice switch to the focal point of the maul and the Leinster flanker was on hand to break off just short of the line and force his way over.

The Cheetahs, on the back of some scrum dominance, scored the final two tries of the game, through replacements Boan Venter and Aidon Davis, demonstrating some character in the alien conditions. Leinster will be happy to have come through the game with no injury concerns, having played bright, cohesive rugby.

The pack were excellent throughout, particularly the backrow and while the scrum was a little bit of an issue in the second half, the other set piece, the lineout, well run by Molony, gave the home side a platform to maul powerfully and was the starting point for several tries.

Leinster’s next assignment is at the Gnoll next Friday where they will take on an Ospreys side buoyed by their victory over Ulster at the weekend. Cullen confirmed that there will be personnel changes, some contingent upon players required by Ireland, while he will also look to give others an opportunity in Wales.

A word too for referee Ben Whitehouse, he handled the game, the conditions and a flooded whistle at one point in exemplary fashion.

1 Nicholas Quinn: ‘Swimming became how I dealt with grief’
2 A beautiful, happy accident - Moneyball is the best sports movie ever
3 Iggy Clarke cherishes the friendships he made while playing for Galway
4 Matt Williams: We all need a bit of Bud Maher’s resilience right now
5 Ian O’Riordan: The aloneness of the long-distance rider
Real news has value SUBSCRIBE