Johann van Graan frustrated as Munster undone by own errors

‘When you play away from home and you’re 19-0 down, you can’t be expected to win’ 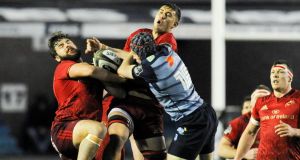 Johann van Graan cut a forlorn figure at full-time after the 25-18 defeat to Cardiff Blues.

Munster’s South African head coach had every right to be disappointed at what he’d seen from his team in the Welsh capital because it was away mistakes which cost them dearly.

A poor first-half display meant the visitors were always going to struggle to come back following home tries for Macauley Cook, Lloyd Williams and Owen Lane.

Scores from Chris Cloete and Stephen Fitzgerald and a late Tyler Bleyendaal penalty with the last kick of the game ensured Munster left with a losing bonus point.

The truth is they didn’t deserve much more, as Van Graan admitted.

“The first half most definitely cost us the game. When you play away from home and you’re 19-0 down, you can’t be expected to win the game,” he said.

“The disappointing thing was that it was all our own errors. Credit to the team because at half-time we reassessed and said that it wasn’t good enough. I thought we did well to come back to within one score at 19-15 and we had a couple of opportunities to get in front, but didn’t use them.

“At the end to come away with a losing bonus point, I think I’ll take that.”

Despite boasting four of Ireland’s Six Nations squad in their starting XV, Munster produced a decent enough opening 10 minutes before then coming unstuck.

Van Graan, in fairness, would not have planned for such basic individual mistakes and also, a degree of bad luck. In the build-up to Cook’s opener Ellis Jenkins seemed to knock on and there was also a hint of a forward pass.

That said, it shouldn’t detract from the fact Munster were second best. Scrum-half Duncan Williams saw his clearance kick charged down by opposite number Lloyd Williams for Cardiff’s second and Lane then added a third try in just eight minutes.

“The mood of the squad is disappointment. We came here to win even though we always knew Cardiff were a good side,” Van Graan said. “The disappointing thing for us is we didn’t make them work very hard. It was our own errors and they were basic errors.

“I don’t think it was a slow start. In the first eight minutes we played very well, we had a kick at goal and missed that and then we had a charge down and kicked one ball straight into touch.

“It’s not that we lost the territory battle or the possession battle.”

Munster’s sixth defeat of the Guinness PRO14 season means they are now 16 points adrift of Glasgow Warriors at the top of Conference A.

The Scottish side are next up for Van Graan’s men on Friday. Repeat the same mistakes at Irish Independent Park as they did in Cardiff and the result will be the same.

After a half-time rollicking from Van Graan with his team 19-5 down following Cloete’s effort, Munster rallied at the start of the second period.

Ian Keatley kicked a penalty before Fitzgerald finished in the right corner with Blues hooker Matthew Rees in the sin bin after being penalised for offside. The comeback didn’t get much further.

Jarrod Evans kicked two penalties for the hosts to put them back in control and Bleyendaal had to put a last-gasp penalty over to ensure Munster travelled home with something to show for their efforts. There was good news for Van Graan on the injury front as Glasgow lie in wait.

“There are no serious injuries, just a few bumps and bruises but nothing too serious,” he said. “Glasgow are playing fantastic rugby. You only had to look at their performance against the Cheetahs on Friday night to see that and they’ve only lost once all season in the PRO14.

“We’re coming up against the best team in the PRO14 on Friday night so we’ll have to improve and that’s what we’re planning on doing this week. We’ll look at this game emotionally and then come back in on Monday and start again at zero.”