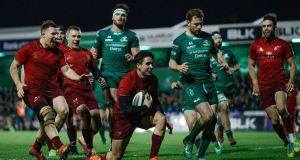 They started the day in second and third, but after a thunderous and thrilling night in front of a 6,129 capacity crowd, ended it first and fourth. This was a statement win by Munster, and in all probability, their most complete performance of the season.

It says everything about Connacht’s improvement this season that it needed to be.

In the process Munster availed of Glasgow’s defeat to Treviso to move to the top of Conference A, while the Ospreys moved into third thanks to their win over Cardiff. Nonetheless, Connacht joined them on 37 points with a hard earned and deserved bonus point.

On an extraordinarily becalmed and perfect January night for rugby, Munster sought to work their way into the Connacht 22 and their heavy duty pack became increasingly influential as the night wore on, not least at maul time. The refreshed Peter O’Mahony and Tadhg Beirne were on top form and also a regular thorn in Connacht’s side at the breakdown.

They had more ballast in their carries, and outside of Alby Mathewson’s crisp service, Joey Carbery pulled the strings deftly before switching, tellingly, to fullback in a 14-point man of the match performance. Chris Farrell’s carrying, physicality and deft touches also became more influential.

All that said and done, a depleted Connacht stuck to their task superbly. Like a dog with a bone they wouldn’t go away, absorbing all manner of blows and always looking to conjure something from their strike plays and in phased attack.

Like Carbery, Jack Carty also didn’t miss a kick and chipped in with a try, while Tom Farrell was outstanding, generating forward ball and openings with his strong carries and offloading. Cian Kelleher’s work in defence and attack was also first-rate.

Already missing the inspirational duo of Jarrad Butler and Bundee Aki, Connacht were further weakened by the loss of Denis Buckley, who has been such an integral part of their successes this season. He had been in line for his 150th cap for his province, but withdrew with a stomach bug.

Peter McCabe was promoted from the bench, with the 21-year-old second year academy prop, Mathew Burke, promoted to the replacements, from where he had won four caps against the Dragons in this competition and Sale and Perpignan (home and away).

But once Andrew Conway crossed in front of Jean Kleyn’s carry, Connacht were quickly into their stride and going through the phases, debutant Tom Daly made a big incision with the second of two good carries before Tadhg Beirne engineered one of his trademark turnovers.

Soon it was Munster’s turn to go through the phases after both centres found touch inside the Connacht 22, but this in turn allowed Connacht to demonstrate the quality of their defensive work, both in their numbering and the accuracy of their tackling.

Munster had gone back about 20 metres through multiple phases when Arno Botha was held up in the tackle by first Farrell and then Matt Healy, whereupon Farrell wrestled the ball from the South African number eight, turned and almost ambled over untouched from his own half. Carty converted.

Munster’s response was swift and decisive. Mathewson dragged Caolin Blade over the touchline from Alex Wootton’s grubber to earn an attacking lineout as Connacht’s defence suddenly lost its shape.

The men in red ran straight and hard through the phases as Munster became a bit more direct, before Carbery pulled the ball back behind Conway’s decoy run for Keith Earls to make a half-break and offload out of Kelleher’s tackle for O’Mahony to score.

O’Mahony then won a key turnover penalty after Carty’s half-break and offload released Blade, although it didn’t appear he had released in the tackle. In any event there was an inevitability about the try that followed after two mauls were brought down.

Chris Farrell was involved tellingly, first when deftly pulling the ball back to Carbery and then carrying hard. Jeremy Loughman was allowed to dive off his feet and illegally prevent a turnover, but after the TMO ruled out a touchdown by John Ryan, Mathewson ran infield off a solid scrum. This drew in Daly as well as Blade sufficiently for Dan Goggin to take the pass on the charge and ride Daly’s tackle to score. Carbery’s conversion made it 14-7.

Connacht came back into the game and finished the half with one of their strike plays which have contributed to their improvement this season. Off a scrum inside their own 10-metre line, Carty’s big pass switched back to the blind side where Matt Healy dummied and slipped out of Mathewson’s tackle to make 40 metres.

O’Mahony was penalised for either kicking the ball in a ruck or manhandling Blade, and Carty nailed a fine 45-metre penalty to end the half at 10-14.

On the balance of play, that was something of a result for Connacht. So was the resumption.

Within a minute, Tom Farrell stepped inside Chris Farrell and handed off Goggin before passing off his left to Kelleher, who finished very smartly from about 40 metres out. Carty nailed the conversion.

Another Connacht attack ended when Colby Fainga’a illegally picked from in front of the ball and when part of the ruck.

Instead, Munster attacked from deep, Earls drifting infield and probing for a gap, as his offload and one by Chris Farrell released Wootton for a big break.

Beirne carried it on strongly and from the recycle Mathwson’s long floated pass gave Goggin his second touchdown, although the home crowd believed it was was forward and roared for a review, unsuccessfully. Carbery’s conversion restored Munster’s lead at 21-17.

The prompt introduction of Conor Murray and CJ Stander demonstrated Munster’s desire for a bonus point win. O’Mahony, having angered the Clan Terrace by tackling Carty after he had kicked ahead, won a turnover penalty after a superb counter from Conway, and when Daly didn’t roll away, Carbery made it 24-17.

Tyler Bleyendaal was introduced for Wootton, with Carbery switching to fullback with devastating effect.

After O’Mahony spoiled a Connacht lineout, which also yielded a penalty when the Munster skipper was tackled in the air by Gavin Thornbury, a lovely left footed grubber by Carbery earned an attacking lineout after Healy was tackled into touch.

Going wide off the lineout maul, Bleyendaal’s long skip pass found Carbery in space, always a bad omen for the opposition. He stepped Healy to score and added the conversion. Like the night itself, the Sportsground crowd were suddenly becalmed.

But not for long.

Tom Farrell made another of his bullocking runs, and freed his hands in the tackle for the supporting Fainga’a, who did likewise when tackled by Tommy O’Donnell, releasing Carty to run in the try from around 35 metres, his conversion bringing them to within a score.

Now the Clan Terrace echoed to the Fields of Athenry but Munster demonstrated another of many strings to their bow, as they dominated possession and ran down the clock.

Solskjær considered replacing Fred before red card against PSG 06:38
Chance meeting that led to Caoimhín Kelleher keeping goal at Anfield 06:00
Olympic boxing qualification tournament to resume in April 06:00
Brexit: No clarity yet on Premier League clubs being able to sign Irish teenagers 06:26
Cian Healy confident player-empowered culture will deliver 06:00
Here is your handy guide to sport on television this week