Garry Ringrose hopes to return to Leinster in ‘couple of weeks’ 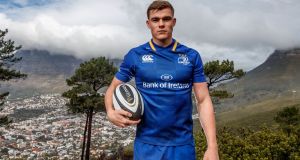 Garry Ringrose: player racking up 22 matches for Leinster in 2015-2016 and then last season lining out for a further 17 times for the province. Photograph: James Crombie/Inpho

Garry Ringrose is in the final semester of his rehabilitation following shoulder surgery, trying to suppress bubbling impatience, as he awaits clearance to return to unrestricted training.

On returning from Ireland’s tour to the United States and Japan, the 22-year-old spent two weeks on the Greek islands of Mykonos and Santorini with his girlfriend, a perfect salve to body and spirit, following surgery. He also managed a trip to Cape Town alongside Jonathan Davies and Jonny Gray, to help launch the Guinness Pro14 in South Africa, the prerogative of those not involved in early season matches.

It’s been quite a remarkable couple of seasons as a professional rugby player racking up 22 matches for Leinster in 2015-2016 and then last season lining out for a further 17 times for the province.

He made his Ireland debut against Canada – he was an unused replacement in the victory over New Zealand in Chicago – last November, going on to win 11 caps, scoring four tries and a conversion, as he established himself as first-choice outside centre for club and country.

The approbation of his talent was further recognised in being name-checked by Warren Gatland as a player who was very unlucky not to make the Lions touring party to New Zealand. He’s played exactly 50 matches in the blue and green at elite level.

Modest and polite, it’s easy to see why his coaches and peers are impressed with his focus, work ethic and voracious appetite to learn and improve that complements his obvious talent. He admitted: “I’m feeling good. Thankfully I was able to get the procedure done as soon as I came back from Japan, which was planned, and from then it’s all been going well. Hopefully, I will be back in a couple of weeks.”

Traditionally, he would keep a weather eye on the Super Rugby but he had additional reason to pay close attention to the most recent tournament. “I would be guilty of watching a couple of games on a Saturday out of interest but then once we got wind that South African teams might be joining what is now the Pro14 it was about paying particular attention and trying to watch any match involving [the Cheetahs and South Kings].

“The style they play is incredibly attack-focused as you can see from some of the tries they score, which originate from deep. They both play a fast-paced game with plenty of width. It probably suits the attacking style of the way the Pro14 is going.

“You look two years ago when Connacht won it and the style of rugby they played and then last season and the fashion in which the Scarlets won it [the league]. The South African teams will certainly add to the pot in terms of attacking rugby.”

The disappointment of Leinster’s two semi-final defeats last season, to Clermont Auvergne at the penultimate stage of the Champions Cup and the Scarlets at the RDS haven’t been forgotten but Ringrose explained the coaches and players are determined to turn a negative into a positive in the upcoming season.

“We fell short in the two semi-finals and that sticks with you. You have a bit of a chip on your shoulder but you turn up for pre-season and everyone is excited to get going again. It’ll be [about] trying to self-improve, as individuals but also collectively to benefit the team. It’s important to take bits and pieces from each game, win or lose and work to be better. That hopefully will carry us to a more successful finish to the season.”

On a personal level he spoke of his experiences in those two matches. “Against Clermont it was certainly a learning curve for me; it was my first time playing there, a game of that intensity with that sort of atmosphere and a semi-final too,” adding that “fine margins, a bit of composure and nailing the basics,” held sway in terms of the outcome.

His Ireland debut, forced him to redefine his pre-season goals. “I wouldn’t have expected to get the [Ireland] caps in the autumn series and Six Nations [but] it was pretty special for me and my friends and family.

“There are definitely a couple of ‘pinch yourself’ moments and I am well aware that I was lucky on a couple of opportunities, being in the 23 going over to Chicago and even though I didn’t get on, I was on the bench.

“There were one or two ahead of me, Keith Earls picked up a knock, Jared Payne too and Robbie [Henshaw] in the autumn series playing against New Zealand the second time [in Dublin] so I am certainly aware that I have been lucky to get the opportunities I have been given.

“Personally I don’t think I’m in any way a finished product or happy to sit back and get comfortable, especially with the competitiveness in and around Leinster and undoubtedly in and around Ireland. I am concentrating on the areas I need to improve and that would extend to all aspects of my game.”

Switching tack to his goals for this upcoming season he explained: “For me it is about trying to learn as much as I can and pay close attention to the coaches, Leo [Cullen], Girvan [Dempsey], Stuart [Lancaster] and Fogs [John Fogarty] as well; basically just try and keep improving, learn as much as possible and pay attention to the advice that’s given on and off the pitch.”

A case of more of the same really.