Frustration for 14-man Ulster as Leinster machine rolls on 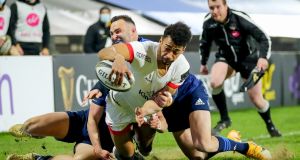 Anyone who merely casts a glance over the bald statistics of this game – namely a red card, five yellows and 27 penalties – might be forgiven for thinking it was a filthy bloodbath. Or any rate a bad-tempered derby. It was anything but.

The first yellow card was for a high arm by Devin Toner on Michael Lowry, an occupational hazard of a sport which accommodates 6ft 10in locks and nippy, low to the ground, 5ft 7in backs.

Jimmy O’Brien’s yellow card was more clear-cut, as he caught Ian Madigan head-on-head after reading the outhalf’s wraparound. Indeed, it might well have been red.

Stuart McCloskey’s yellow card was for preventing a certain try when impeding Scott Penny’s pass after a stunning break by Max O’Reilly and offload to Luke McGrath.

The defining moment was the red card for Andrew Warwick.

Whereas the overly influential TMO Olly Hodges went along with Frank Murphy’s view that Madigan’s leap amounted to mitigation in the case of O’Brien, he asked Murphy to review his decision to initially issue Warwick with a yellow card for leading with his forearm into Ed Byrne’s neck when tackled low by Rhys Ruddock.

Murphy reasoned that he hadn’t seen a high degree of danger, to which could be added Byrne was also going in too high, but “the point of contact” was the key issue for both officials, even if they wrongly said it was an elbow into the neck, for it was a fend with the forearm. Warwick was trying to protect himself, not inflict harm.

If anything, O’Brien’s offence was worse. It was a pity for the game itself, for despite another soulless empty stadium, it was shaping into one of the matches of the season.

In all of this, player safety is paramount, but there is certainly some short-term pain for the longer term game, and it’s noticeable how players are imploring officials to take action for anything suspicious.

The second-half yellow cards for Ruddock and Ulster academy lock, Cormac Izuchukwu, an athletic, ball-carrying prospect, were for repeat offences defending the line, albeit the latter, for a supposed no-arms tackle, was decidedly severe.

Murphy ensured quick ball by penalising tacklers for not rolling away and he enforced the hindmost foot for the most part, but that is now 11 red cards and 47 yellow cards in his 43 Pro14 games.

In the absence of Toner, Ulster struck twice through Marcell Coetzee – whose hamstring injury was another body blow – and Robert Baloucoune.

This was actually the try of the match, featuring offloads by Kieran Treadwell and McCloskey before a finish by Baloucoune, using all his strength and every inch of his 6ft4in frame, which belied his long absence.

Baloucoune underlined he is a Test winger in the making with an even better finish when coming off his wing to beat Ross Byrne and then veer around Dave Kearney with that Doug Howlett-like ability to change direction at full tilt. This was harshly ruled out for McCloskey’s decoy run supposedly blocking Ruddock.

Leading 12-3, Ulster had two more plays against 13 men but curiously, on both occasions John Cooney opted for box kicks.

Restored to a full quota up front when Toner then returned, Leinster located an Ulster Achilles heel with a monster scrum as Ed Byrne and Michael Bent exposed the comparative inexperience of Tom O’Toole and Eric O’Sullivan.

Either side of McCloskey’s yellow card, Bent and Josh van der Flier rumbled over from Leinster’s trademark forward assaults.

Ed Byrne and Rhys Ruddock did likewise, as did Nick Timoney for Ulster before Dan Sheahan sprang off a maul to complete the scoring.

In any event, Cullen conceded it’s time for a serious rethink by coaches and players alike.

“Clearly the game is being refereed very, very differently from what it would have been even last year. So for us, we just need to try and figure out what it is the referees are looking for and what can we deliver on ourselves.”

“I was surprised to see some of the cards. I’ll go back and go through all the channels that we usually go through.”

The champions have now accumulated 13 attacking bonus points in 14 games, and have won 32 of their last 33 matches.

Granted a run of games, Scott Penny maintained his form with 17 carries for 54 leg-pumping metres here, while the enduring excellence of Luke McGrath almost goes unnoticed.

They were denied 15 internationals, were rocked back by a blinding Ulster start, and came back to win well. Collectively, they hardly seemed to have a set-piece malfunction or have a handling error all night.

Matsuyama: ‘hopefully I’ll be a pioneer and many other Japanese will follow’ 07:42
Matsuyama makes Masters history for Japan; Irish rowers win gold and silver 07:24
Leo Cullen: ‘a good chunk of the guys who are injured will be back’ 06:15
Rachael Blackmore’s Grand National victory resonates around the world 06:00
Louis and Robinson may have died broke but their legacy is timeless 06:00
Here is your handy guide to sport on television this week