Connacht aiming to get back on track in Treviso 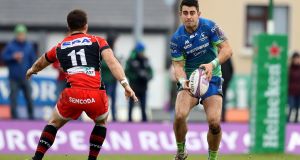 Tiernan O’Halloran: returns to the Connacht side for the game against Benetton Treviso. Photograph: Tommy Dickson/Inpho

In theory there isn’t a better time for Connacht to be making a trip to Treviso given that their hosts are without 12 players on duty with Italy and another seven who are absent through injury.

However the Italian club have won seven matches this season and there is still more than a smattering of players with Test match rugby experience in the side chosen by Kieran Crowley. The progress the club has made in terms of both results and performances this season has been impressive.

Connacht are coming off the bitter disappointment of last week’s home defeat to Zebre and coach Kieran Keane will expect a positive reaction.

Tiernan O’Halloran, Denis Buckley, Sean O’Brien and Jarrad Butler return to the side after injury, while a fit-again Niyi Adeolokun is included amongst the replacements.

Ultan Dillane has been released from the national squad for this match but unlike his team-mates will return to Dublin after the match to rejoin the Ireland set-up while Connacht head for South Africa and their two-game mini-tour against the Cheetahs and the Southern Kings.

Keane admitted: “We have a number of players coming back from injury which will be a big boost against Treviso. They are on a great run of wins and I’m sure they will be targeting us especially when they have been so competitive at home this season.

“The majority of the squad will travel on to South Africa, but we have put plans in place for replacements to join the squad after the game in Italy. These two games will really test the depth of our squad.”

1 Cian Healy: ‘Realistically I got away with murder when I was younger’
2 Seán O’Brien: Anger over my parents’ break-up never left me
3 Barcelona president Josep Maria Bartomeu and board of directors resign
4 Sub-four miler Michael Woods kicks to another Vuelta stage win
5 Gerry Thornley: Antoine Dupont and France look perfectly primed for Ireland visit
Real news has value SUBSCRIBE