White steps down from Sharks fuelling rumours of arrival at Ulster 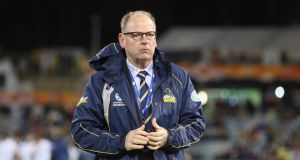 Adding fuel to the rumour that he has been linked with the vacant position of Ulster Director of Rugby, Jake White has stood down from the same job with the South African Sharks Super Rugby team. However, media outlets in South Africa suggest that White’s move, after just one year with the Sharks, is to pursue international opportunities ahead of the World Cup next year.

White, who coached South Africa to victory at the 2007 World Cup, guided the Sharks to third in the 2014 Super Rugby season having led Australia’s ACT Brumbies to the final the previous year. “The time is right for Jake to free himself up for any international coaching and consulting opportunities ahead of the tournament in England,” the Sharks said in a statement on their website on Monday.

Meanwhile, Jared Payne will most likely return to the Ulster line-up for Friday night’s game against Edinburgh after recovering from the hip injury he suffered in the province’s opening 32-all draw away to the Scarlets.

Paddy Jackson and hooker Rob Herring are also expected to be passed fit after the outhalf suffered a head wound in the defeat against Zebre on Saturday that required stitches. Herring, suffered a ‘stinger’ to his shoulder during the game, but trained today.

Iain Henderson underwent a successful hip operation last Thursday, and having begun his rehab today his progress will be reviewed at 12 weeks to determine an accurate prognosis for his return to rugby.