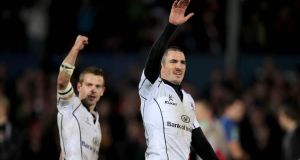 Ulster coachNeil Doak, has made three changes to the side that beat Edinburgh for the visit of table-toppers Glasgow Warriors to Kingspan Stadium tomorrow evening (5.05).

Paddy Jackson’s absence (concussion) means that Ian Humphreys starts at outhalf, making his 88th appearance for the province. The rest of the backline is unchanged.

There are two changes in the pack. Andrew Warwick is selected at loosehead in place of Ruaidhri Murphy. Alan O’Connor, who impressed on his first start for Ulster last week, keeps his place in the secondrow and starts alongside Franco van der Merwe.

In the backrow, Ireland internationals Chris Henry and Robbie Diack start either side of Nick Williams who is selected at number eight ahead of Roger Wilson.

Luke Marshall is unavailable as he has a slight groin strain. He will be assessed on Monday to determine the extent of the injury.