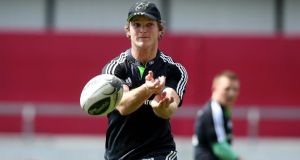 Former Crusaders back Tyler Bleyendaal has been going well in training for Munster. Photograph: Donall Farmer/Inpho

Tommy O’Donnell looks set to miss Munster’s clash with Dragons on Saturday as Anthony Foley’s men bid to get the bonus-point win which could secure a home semi-final in the Guinness Pro12.

But while Foley is also sweating over the availability of Simon Zebo, Felix Jones and Dave Kilcoyne, former New Zealand under-20 captain Tyler Bleyendaal could finally be set for his Munster debut.

The 24-year-old, signed a year ago, has battled his way back from surgery on a prolapsed disc and Foley might be tempted to draft him in.

The former Crusaders outhalf or centre played for the Munster A side recently and Foley admitted yesterday that he is flying in training.

“He’s getting there. He’s working hard, he’s a good professional and we’ve all got good time for him.

“Look, he’ll be in the mix for this weekend and we need to make sure it’s the right thing for him to do.”

Doubts over Zebo (back spasm) and Jones (hand) might influence Foley’s call in giving the versatile Bleyendaal his long-awaited bow.

“Simon went into the game with back spasms during the week. He trained Thursday with us and got through that and he got through the warm-up.

“He took a big knock early on in the game and his back started to go again so we thought it best to take him off early before there was any more damage.

“Tommy’s getting a scan and we’d have a small bit of concern around that so we need to get a specialist to have a look at it and that’s happening either today or tomorrow.

“Dave Kilcoyne is doing his return-to-play protocols around his head injury and Felix Jones was in a sling but trained fully today. He’s fine. It’s his hand.

“I wouldn’t say we’d be seeing Tommy this weekend,” added Foley, who said none of the others were ruled out at this stage.

But the Munster coach said there was no question of holding players back for the semi-final the following week.

“We’re not resting anyone this weekend. It will be who’s good to go is good to go. I think it’s important that we approach the game like that and we go from a mindset that we have massive respect for Dragons.

“They’re well coached, they had us at one stage at Rodney Parade, 9-7 up at half-time, and we understand the physical battle that’s going to be out there on Saturday and we need to prepare for that.

“We need to get that momentum and keep building on positive performances and going forward.”

Snatched Foley said they had parked the draw against Ulster when victory was snatched with the concession of seven points in the final play of the game.

“It’s definitely two points lost. The boys worked themselves into a very good position and were the dominant force for the last quarter of the game and turned that into points. Unfortunately, we didn’t see the game through.

“It’s something that we’ve spoken about in review and hopefully if we get into that situation again we’ll see it home,” he said.