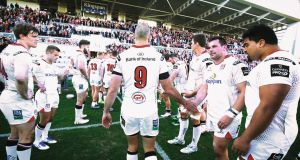 In a season to forget at least Ulster managed to hit the right note with their emotional farewells as a tearful Ruan Pienaar headed the departing a cast list by exiting off the back of a win even though its relevance was meaningless regarding the province’s final position in the Pro12.

It may also be no bad thing that Leinster were given a bit of wake-up call ahead of hosting the Scarlets for Friday week’s league semi-final and that this scratchy performance should flush out any complacency that might have been seeping into the players’ minds.

As a spectacle of rugby it was pretty forgettable on an evening all about emotion as Ulster put everything on the line to see Pienaar off in an appropriate manner on his last competitive outing in the shirt.

Pienaar’s departure to Montpellier – brought about by the IRFU’s call not to allow the South African a contract extension after seven years at the club due to the requirement of an Irish-qualified player to play scrum-half at the northern province – has stuck in the craw around the Kingspan so there was also anger and a clear sense of injustice channelled into this game even though it was a dead rubber interprovincial for both teams.

Of course Pienaar – who came off to a huge ovation after 69 minutes – wasn’t the only one leaving the Kingspan as man of the match Wilson was also playing his 221st and final competitive game in an Ulster shirt before retiring while replacement prop Ricky Lutton is leaving and coaches Neil Doak and Allen Clarke are also away.

Yet the treatment afforded to Pienaar – who had wanted to finish his career in Belfast – was the main driver for the home side.

Ulster wanted it more, allowing them – and under pressure director of rugby Les Kiss – to at least end a crushingly disappointing season on a relative high while Leinster went through the motions and seemed to let the occasion undermine their desire and accuracy.

It was understandable as Leo Cullen’s squad had nothing substantial to play for and could be content with second place in the table having already booked their home semi-final.

Ulster’s need was so much greater having already no realistic chance of finishing any higher than fifth and therefore missing out on a top four finish for the first time since 2012.

And their feelings were best expressed by centre Luke Marshall who talked of a weepy changing room beforehand and a burning desire to match the occasion with a result.

“In a game like that the emotion has to drive you,” he said after Ulster had finished a point behind fourth-placed Ospreys.

“As players we’re annoyed,” he added of Pienaar’s enforced departure.

“We don’t understand the decision to be honest. I suppose we can’t air our frustrations too much against our employers [the IRFU] but I can totally understand the supporters’ feelings.

“For me [the win] was a motivating factor to cap his [Pienaar’s] last season here.”

Leinster’s first Pro12 loss since Munster turned them over on St Stephen’s Day was certainly something that Cullen was reflecting upon afterwards.

“We need to make sure we’re a hell of a lot better than we were here because you can’t take anything for granted,” he said looking ahead to next week’s semi-final meeting with the Scarlets.

“You’ve got to go out and make things happen and I think that little bit of knowing you’re in the semi-final had an effect on the mentality,” he added, while saying that Sean O’Brien, Robbie Henshaw and Jonathan Sexton may be ready to feature against the Scarlets.

Ulster led 10-6 at half-time thanks to an early Wilson try which was converted by Paddy Jackson who also kicked a 40th-minute penalty while the visitors managed two Joey Carbery penalties.

Pienaar’s cross-kick created Andrew Trimble’s vital try five minutes before the hour which Jackson superbly converted from the touchline but Leinster couldn’t add to their 61st minute penalty try and conversion from Carbery.