On surface of it Cardiff have advantage over Ulster 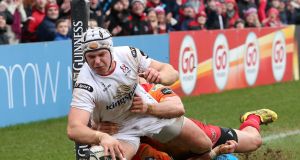 Luke Marshall will start alongside Sammy Arnold in the Ulster midfield for the first time against Cardiff. Photograph: Darren Kidd/Inpho.

Both sides hope to rebound from defeats, Ulster falling to Scarlets last week and Cardiff to Leinster.

Paddy Jackson will captain Ulster and partner Springbok scrumhalf Ruan Pienaar with Sammy Arnold and Luke Marshall starting in midfield together for the first time.

Nick Williams returns from injury to start at number eight, with Robbie Diack and Chris Henry in a decent looking backrow.

Cardiff include three players, wing Tom James, backrow Josh Turnbull and frontrower Kristian Dacey, who have been released by Warren Gatland with James and Turnbull starting in a much-changed Cardiff side from last week.

The plastic pitch in Cardiff Arms Park is an advantage and while Leinster’s game was largely a slug fest in terrible conditions of rain and high winds, the surface usually makes for a faster tempo.

“It’s another crucial home game at a venue where we are always extremely motivated to win,” said Cardiff head coach Danny Wilson. “Ulster are a good side, home or away they always perform, and they have depth to their squad, despite international call-ups.”

In a tight game the surface may just favour the home side.