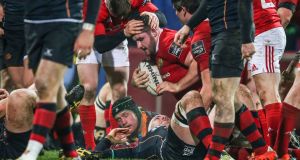 Dave Kilcoyne and his replacement James Cronin combined for three tries as Munster ran out 26-5 bonus-point winners over the Dragons at Thomond Park.

The Newport Gwent outfit made Munster fight all the way for the bonus point, with prop Cronin eventually claiming it with 77 minutes on the clock.

Loosehead Kilcoyne’s third try in as many games was followed by Rory Scannell’s first for the Irish province as they teed up a 12-0 half-time lead.

Although Kilcoyne completed his brace, the Dragons hit back through Hallam Amos’ 46th-minute touchdown and were inches away from a second try courtesy of Adam Warren.

Just when it seemed like this Pro12 tie would peter out, the home pack got their reward via the direct route again. Cronin’s late effort sealed the bonus for Munster who trail fourth-placed Ulster by four points. They have a game in hand — away to Cardiff Blues — coming on Friday, March 18.

Both sides blew early opportunities to open the scoring, with the Dragons infringing at a maul and Munster unable to profit from a lung-bursting Francis Sali run.

The deadlock was finally broken at the end of an error-strewn first quarter, Andrew Conway scurrying forward over halfway and subsequent pressure in the 22 saw Kilcoyne crash over from a close-in ruck.

Munster pushed further ahead in the 33rd minute. Captain Billy Holland set up a maul that was grounded in front of the posts, before quick ball saw centre Scannell slip out of Phil Price’s tackle to score to the right of the posts. The conversion was drilled over by Ian Keatley.

The Munster forwards, including man of the match Dave O’Callaghan, continued to press on the resumption, with loosehead Kilcoyne piling over for his second try just three minutes in. Keatley added the extras for a 19-0 scoreline.

Wales winger Amos opened the Dragons’ account with an unconverted 46th-minute try, Jason Tovey breaking past Duncan Williams and then popping up to supply Amos with the scoring pass out wide.

The visitors looked far more threatening with the newly-introduced Sarel Pretorius and Angus O’Brien setting the tone from half-back, and loose kicking from Munster kept the Dragons in advanced positions.

Pretorius almost wriggled his way through for a try from just outside the 22, and the Dragons had another near miss when centre Warren was held up — Cronin’s right leg came to Munster’s rescue on this occasion.

The Welsh region butchered a lineout move and Munster’s set piece also let them down in attacking situations. However, the province’s accuracy returned with three minutes to go as Cronin scrambled over for close range and replacement Johnny Holland converted.

The 10-placed Dragons deserved something for their second half showing, but their frustrations were summed up in injury-time when they were held up once more, following a terrific break by Ashton Hewitt.