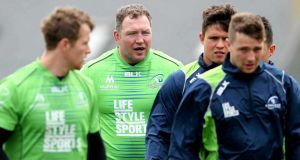 MIchael Swift is on the bench for his final home game before Connacht retirement. Photograph: Inpho

Connacht boss Pat Lam has made three changes to his side ahead of Saturday’s fixture against table-toppers the Ospreys at the Sportsground.

The game presents a last chance saloon for Connacht as they look to achieve their season goal of a top six finish in their final outing.

Currently lying seventh and four points behind the Scarlets in sixth, Lams men need a win as well as hoping Bennetton Treviso can do them a favour at home against the West Wales side.

Kieran Marmion has come back into the backline following last weekend;’s comprehensive win over Zebre, while province centurion Fionn Carr starts on the right wing and Andrew Browne starts alongside Aly Muldowney in the secondrow.

Connacht legend Michael Swift has worked his way back from injury to take a spot on the bench, and with retirement looming at the end of the season any appearance is likely to be his last in front of a home crowd.

Lam said: “”This is probably the most experienced team that we can put out and that will be vital against Ospreys. No man has more experience than Michael Swift.

“He has worked extremely hard the last few months to get himself back to this position and the preparation, detail and intensity he showed in training this week demonstrated how deserved his inclusion is in the match day squad.

“We all know the enormity of this game. Since pre-season, we have set our sights on a top six finish and to be going into round 22 with our ultimate goal still a possibility is very exciting. Its uncharted waters for Connacht Rugby to have so much to play for at this stage of the season and we’re really relishing it. Come 5pm tomorrow, we will know our fate.”