Liam Toland: Munster have the power to end their losing streak 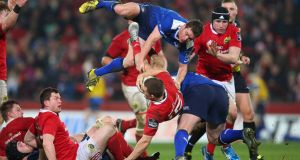 At half-time Munster had 96 carries to Leinster’s 44, but the score was 7-10 in Leinster’s favour. The wind had a hand in this, as did Munster’s miss at goal, but it tells of their challenge. Five games into a losing stretch with Ulster away tomorrow is not pleasant but there are key aspects that are fixable.

First, it’s important to acknowledge that the mean – or average – Munster player has drifted below the Leinster equivalent. There has always been an argument over talent between the sides but in the recent past as both rebuild and eke their way into the ‘new’ world of heavy French and English finance, Leinster hold sway on quality.

Leadership is also an issue, especially when a team is struggling and Peter O’Mahony is a clearly a huge loss. I was fascinated in the closing minutes at Thomond Park when Munster on another foray into Leinster’s half, had a penalty with ten points in it and the clock down to 4 minutes 30 seconds.

Munster went to touch to home crowd approval, botched the lineout and Leinster eventually scampered over for an opportunist intercept try where a possible 10-17 and a bonus point became 7-24 and nothing.

The big issue for Munster during this tough spell is their struggle to convert pressure and advantage into points.

The good news? There’s plenty of opportunity. I watched before kick-off as Munster ran their warm-up lines: full of confident running, switching the point of attack with ease as they zipped passes flat and wide. They are clearly struggling for an outhalf who can kick goals and maintain their warm-up routine as the pressure of games evolves.

On 51 minutes, Munster were flying into Leinster but Tyler Bleyendaal at outhalf (who looked lost throughout) kicked cross-field. Munster had made great ground but remember the 96 Munster carries in the opening half? Well, watch where they are happening: in heavy traffic. It’s admirable but lacks the edge in the warm-up.

In the lack of a dominant outhalf, Munster’s first receivers are stepping up but taking into contact ignoring those better placed outside. The back three are lightning but rarely get the quick ball they do in their warm-up.

So the real difference is when a tiny window of opportunity opens for Munster, the very next play is often slow and rarely gets the ball into the vulnerable space.

The narrow Munster carries afforded time for Leinster to filter back into defence where the Munster opportunity died. Fix this and scores will come.

In contrast to Munster’s misuse of opportunity, Jamie Heaslip, conscious of the emergence of CJ Stander, needed a big game and his turnover leading to Nacewa’s opening try was just the opportunity. Madigan, Sean O’Brien and Garry Ringrose knew what had to be done: fix defenders, get the ball into space and score.

Tommy O’Donnell’s reappearance couldn’t come quickly enough and he has been a huge loss. O’Brien received man of the match for his fine performance but it was Dominic Ryan who stood tallest. Against Munster’s short lineout, Leinster threw up not Devin Toner but Ryan.

Even on their own lineout they hit Heaslip or Ryan. Around the park Ryan was at everything in his own quiet way, no histrionics, just quality play. His technique around the tackle and tackled player is top class.

And remember the Munster decision to go to touch: it was Ross Molony who stole off Donnacha Ryan but it was Dominic Ryan who lifted Molony from the front. The next lineout was Munster’s and again Molony pinched the ball, but it was Ryan who lifted from behind.

They had an attacking scrum on the left and from the second breakdown Tomás O’Leary went at the fringe and bounced around Luke Fitzgerald and Toner before Madigan landed a hit for breakdown number three.

Munster secondrow Dave Foley focused on Toner. He lost his feet but managed to hold onto Toner’s ankle. Copeland arrived next to secure the ball on the ground.

Munster tighthead John Ryan arrived in behind Copeland, placing him inside the breakdown and with Madigan, the Leinster tackler, and Toner in the breakdown, the ruck laws apply. Can Copeland touch the ball with his hands, pick it up and score the try?

The referee went to the TMO to ask: “Try, yes or no please?” I’m curious if he was wondering how Copeland ended up with the ball. liamtoland@yahoo.com