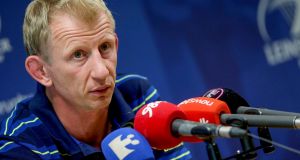 Leinster coach Leo Cullen: “It is a long season. We need to manage our squad as best we can.” Photograph: Donal Farmer/Inpho

It says plenty about Leinster’s strength in depth, and their need for same, that despite using close on 40 players in their three warm-up games a further 15 frontline internationals have still to see any game time. Nor, most likely will they do so in this Friday’s opening Guinness Pro12 game at home to Treviso or for a week or two afterwards.

Seán O’Brien and Robbie Henshaw remain long-term absentees as they continue their recovery from hamstring and knee injuries, with Leo Cullen estimating they may return to action in about six weeks’ time.

This could, conceivably see them in the frame for the meeting with Munster at the Aviva Stadium on October 8th or the ensuing European Champions Cup games at home to Castres and away to Montpellier.

Others carry existing injuries into the early stages of the campaign, namely Richardt Strauss and Rhys Ruddock, are expected to return in about four weeks after knee and ankle surgery. Johnny Sexton and Mick Kearney are both rehabbing shoulder injuries and are aiming at a return “in the early rounds of the Pro12”.

Isa Nacewa and Dave Kearney are seemingly nearer to making a return as they complete their recoveries from the arm and A/C joint injuries they sustained at the tail end of last season. Nacewa is “being managed back this week and depending on how full contact training goes, will be assessed further.”

Furthermore, their academy outside back Ian Fitzpatrick injured his cruciate knee ligament last week and will undergo surgery. This follows their 21-year-old academy product Billy Dardis, who will be sidelined for an estimated 16 weeks after shoulder surgery. There is still no definitive date for a return for their talented 22-year-old prop Ed Byrne, who has been out for a year.

The former Munster lock Ian Nagle underwent a scan yesterday on the shoulder injury he suffered in last Friday’s final warm-up game against Bath and will be out for a few weeks.

Against all of that, Cian Healy, Rob Kearney, Mike McCarthy and Noel Reid all played at least half of that Bath game and will be available this week.

“They are all getting back in on an individual basis,” said Cullen of a contingent who returned to pre-season at the end of July after four weeks’ holidays. “You’ll see them return over the course of the next three or four weeks. It is a long season. We need to manage our squad as best we can.”

While affording so many players game time in warm-up matches was beneficial, Cullen admitted Leinster’s pre-season was a mixed bag.

“Guys really put their hand up and others still have a bit to go. It was disappointing we leaked a few tries at the weekend,” said Cullen of the 39-19 defeat to Bath. “We tried to address a few things after Gloucester and we were repeating some of the same mistakes. We still have a lot of players integrating back over the next few weeks and it will hopefully lead to a very competitive environment as we go into Europe again.”

Friday’s opener is given added interest by the expected presence in the Treviso squad of the former Leinster and Irish Under-20 outhalf Ian McKinley, who lost his sight in his left eye in an accident while playing for UCD in 2012, and retired in 2011, only to resourcefully revive his professional career, thanks to a protective goggle, with first Zebre and now Treviso.

“Ian is a special kid,” said Cullen. “Really special. When he was here with the academy, I was still playing at that stage, there was just something very special about his personality. He obviously got that injury playing for UCD. I’d say it was hard for him to process at the time. But he has gone away, started doing a bit of coaching and back playing, to the stage where he is now as a contracted player with Treviso. It’s an amazing story, really, but it just shows the drive and determination the guy has.”