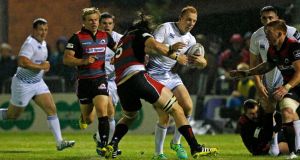 Leinster came to Scotland with hopes of opening their Guinness Pro12 campaign on a positive note but against an Edinburgh side that showed more flair with ball in hand and which had a more aggressive back row the visiting team faded after  promising start.

Still, this is a World Cup season and the bonus for Leinster, apart from keeping defeat down to seven points, was the exposure to this level of rugby of a number of young players. In the event number 8 Jack Conan impressed and there were good performances from replacements Ross Byrne and Bryan Byrne.

The visitors could also take much from their first half defence, the appetite for tight tackling fading only when Edinburgh upped their tempo in the last quarter.

“”We came here with expectations and wanting to go out and play. But unfortunately we turned over ball rather cheaply. Edinburgh were very aggressive at the break down.” said Leo Cullen.

Leinster should have made more of their early territorial advantage during which they had three penalty kicks to the corner. But the visitors, varying their tactics from the ensuing line-outs, were unable to circumvent Edinburgh’s stern tackling.

Edinburgh, too, made several threatening breaks, the best after a steal from a Leinster throw-in that gave centre Chris Dean a chance to carve through the middle only to be stopped by the visitors’ scramble defence.

The deadlock was finally broken when Isa Nacewa kicked a penalty goal following a high tackle on outside half Cathal Marsh. The Leinster full back then came close with a penalty attempt from the halfway line for what could have been a six points lead. As it was Edinburgh were able to reply with a penalty goal from their scrumhalf Nathan Fowles to level the scores.

With their confidence growing Edinburgh were showing good handling skills and when Sam Beard was put into space it took a brave tackle from Luke McGrath to stop the midfielder.

Edinburgh then drove a penalty created line-out but were unable to find a hole in the Leinster defence. Another chance fell to Edinburgh with a penalty goal attempt by Fowles but this time the scrum half was short with his kick leaving the teams tied at 3-3 going into the interval .

Straight from the second half kick-off Leinster erred by knocking on the ball. From the ensuing scrum Edinburgh laid siege on the Leinster line but again they could not dent the visitors’ defence.Worse still for the home side Fowles failed with an attempt at goal.

Edinburgh, however, exerted further pressure after their forwards drove over the Leinster line. But after going upstairs referee Peter Fitzgibbon ruled there had been a knock-on, leaving Edinburgh frustrated yet again .

At the ensuing scrum McGrath was penalised for a crooked feed allowing Edinburgh to hammer at the Leinster line and this time finishing with a try scored by winger Damien Hoyland.

Leinster quickly replied with a second penalty goal by Nacewa and when Edinburgh infringed at a scrum Nacewa was given the chance to kick for victory but this time the full back proved fallible.

At the other end Edinburgh’s full back , after an earlier miss, proved his worth from the kicking tee only to be matched, minutes later by Nacewa leaving the home side with a slender 11-9 lead.

Edinburgh hit back strongly with slick passing but their only reward was a penalty. The home side kicked to touch and when Dominic Ryan was penalised for taking down the maul, earning the replacement a yellow card, Edinburgh repeated the dosage but this time releasing the ball wide for Hoyland to claim his second try to seal victory,

1 Cheltenham faces criticism after racegoers suffer Covid-19 symptoms
2 Andrew Conway diary: In search of a competitive edge
3 Sport will be last duck in the row in return to normality after coronavirus
4 My favourite sporting moment: Shels finally make all the heartbreak worth it
5 Avoid the treadmill at all costs – marathon training in the 2km radius
Real news has value SUBSCRIBE