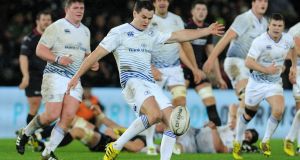 Johnny Sexton was named man of the match as Leinster moved to the top of the Pro 12 table with a 9-22 win away at the Ospreys. Photograph: Inpho

Jonathan Sexton was back to his imperious best as he won his personal duel with Dan Biggar to help send Leinster top of the Guinness Pro 12 table.

The Ireland fly-half kicked seven points and created tries for Dave Kearney and Noel Reid, with the winger adding his second score at the death.

Wales number 10 Biggar kicked all his side’s points, but missed two kickable penalties during a key period to ensure the Ospreys did not even pick up a losing bonus point.

It is seven wins in a row for Leo Cullen’s men, and this was a first Pro 12 victory at the Liberty Stadium since 2009, despite injuries to Jamie Heaslip and Luke Fitzgerald which may cause some concern for Joe Schmidt.

Leinster made a strong start as the rain poured down, making the most of a poor Biggar clearance to camp themselves in Ospreys territory.

The visitors ran through phase after phase of attack to give the Ospreys defence a tough early examination.

In fact the hosts had to make a remarkable 22 tackles during the opening six minutes of play, but they stuck doggedly to their task despite Sexton and Ben Te’o making inroads in the initial thrust of the attack.

The Ospreys first attack proved a costly one for the visitors. Wing Jeff Hassler ran a good angle off a flat Biggar pass and burst his way between the Leinster skipper and Te’o. The two would-be tacklers clashed heads and Heaslip was left flat out on the deck.

The Lions star tried to get back to his feet but quickly sat himself down again after a couple of distinctly unsteady steps that would have given Joe Schmidt cause for concern with the Six Nations opener against Wales just four weeks away.

Dominic Ryan was Heaslip’s replacement and he was soon putting tackles in as the Ospreys turned down a kickable penalty to go for the corner and battered away at the line.

But Richardt Strauss did well to rob opposite number Scott Baldwin and slow the siege, although Biggar did give the home side the lead with a well-taken drop goal in the 15th minute.

However, Sexton soon began to stamp his mark on the game. The Ireland out-half gave the Ospreys warning when one cross-kick found Isa Nacewa and forced the home defence into scramble mode, but the lesson was not taken onboard.

The same ploy, this time to Dave Kearney’s wing, again caught the Ospreys sleeping and the three-quarter beat Sam Davies and carried Hassler over the line with him.

Biggar settled the Ospreys after a difficult period with his second penalty but Sexton soon replied with a three-pointer of his own as his clever kick isolated Brendon Leonard and allowed Sean O’Brien to force the penalty.

The visitors had enjoyed the edge in the tight exchanges but were penalised for wheeling the scrum just before half-time.

However, Biggar let them off the hook as he dragged his attempt wide of the uprights to ensure Leinster went into the dressing rooms with their four-point led intact.

Ill-discipline allowed the Ospreys good field position immediately after the resumption, with Strauss giving away a penalty and Sexton making a rare error deep in his own territory under pressure from Sam Underhill.

But solid Leinster defence managed to hold young Ospreys centre Owen Watkin up near the tryline and allow them to clear their lines.

Biggar blotted his copybook again moments later with a second miss off the tee after the Leinster scrum had been penalised for walking round, but the Wales international quickly made amends when O’Brien was adjudged to have committed an illegal turnover.

The openside soon had his head in his hands again. Ospreys full-back Dan Evans spilled a high ball from Sexton and O’Brien looked set for an easy run in as the ball fell his way, but could not hang on.

However, a second Leinster try arrived with 14 minutes to play. Sexton’s behind the back pass set up the overlap and Reid - just on as a replacement for shoulder injury victim Luke Fitzgerald - supported Te’o superbly to take his pass and score in the corner.

Sexton struck the post with the conversion to keep the Ospreys within sight but Kearney slid his way over from a sharp scrum move to put the result beyond doubt.

Man of the match: Jonathan Sexton.