Leinster and Munster need to step up campaigns 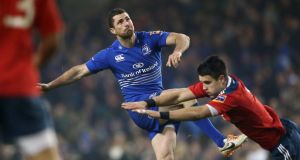 Leinster’s Rob Kearney in action against Munster in their Pro12 encounter at Aviva Stadium in March. Photograph: Inpho.

The derby feels more important than usual – 2015 probably won’t be a bad year, but it could be. A stuttering start to both Leinster and Munster campaigns needs correcting tonight. Of course only one of them can do this.

Leinster have won two out of four Guinness Pro12 matches, gathering winning bonus points in typical fashion. Munster have also lost two. The difference being Edinburgh and the Ospreys beat them in Thomond Park while their victories came over Italian opposition.

A very bad start to Anthony Foley’s reign will flip over to Leinster misery if the visitors win at the Aviva stadium.

So it’s cards on their backs time already. Any international player completing a training session this week has been selected.

“To be fair,” Rob Kearney said, “because we have that welfare system and international players don’t get introduced to the provinces until a little bit later the Irish are always going to start slowly. And that’s why the English love getting the Irish provinces on those first two weekends because they have been back longer and that’s when they feel they can take a scalp off us.”

Munster go to Sale on October 18th while Wasps come to the RDS. A week later Leinster travel to Castres after Saracens, menacingly, visit Limerick on the Friday night.

“We have been done a couple of times in that first round over the years,” Kearney continued. “It does take us a little bit longer but this weekend is when both teams have to put in a competitive performance to improve our European chances.”

It can be said that Leinster have been stripped of their three best players since last season – Brian O’ Driscoll retiring while Cian Healy and Seán O’Brien are crocked – but that’s not really the case.

The two juggernauts combined for 17 Leinster starts in the 2013/’14 campaign while O’Driscoll did a lot of limping.

Matt O’Connor’s bulging squad made do without them. The injuries also open the international road for Jack McGrath and Rhys Ruddock (Peter O’Mahony may disagree in the second half – the Munster captain returns to the bench).

“There is nothing in Rhys’s game that doesn’t indicate to us that he will be a world-class six moving forward,” said O’Connor on Thursday. “You wouldn’t necessarily stretch that out to seven but his lineout skills, the way he carries the ball and his work rate have been unbelievable for us. He should have a very bright future at six.”

Spoken in the context of being finally fit enough to get a run of games, it was still a statement of intent.

Kearney, interestingly, believes the animosity between the tribes has calmed of late. “I don’t think that’s a bad thing. Ten years ago, in my first game, there was a huge hatred and it was probably a little more from them towards us and probably more envy on our part.

“Now I think, I don’t know if it’s because there has been some really good national success over the years, maybe that has brought guys closer together. But I think Leinster and Munster guys off the field are friendly now whereas before they never would have been.

“That’s not to say on Saturday we won’t be trying to bash lumps out of each other. We will. That’s just the nature of the game but I do think the relationship has improved over the years.”

If that doesn’t drive Paul O’Connell and friends into a rage Kearney’s answer to what he sees in Munster’s game of late should.

“Not a huge amount so far. You know, they are only four games in and it is not easy for a coaching staff to come in and change things very quickly. The way they played under (Rob) Penney is very different to how they are trying to play under Axel (Foley). That new game plan will take a while to implement.

“They will be overly-excited for this, as will we. That’s just the nature of this game. But I expect a very different Munster team than we saw against Ospreys in Thomond Park for Leinster in the Aviva. They are wounded.

“Their backs are against the wall. They always come out when they get put down and that’s not this year that’s the last four years.”

After sitting with the print journalists Kearney did the broadcast press conference. A similar enough theme was raised about playing against your best mates. He checked himself but couldn’t resist.