‘Front Up, Rise Up’ extract: the Bundellu Aki story 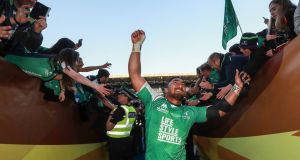 Connacht’s Bundee Aki celebrates as he leaves the field after the team’s Pro12 final victory over Leinster at Murrayfield. Photograph: James Crombie/Inpho

Unlike Pat Lam and the countless others who blazed a trail from New Zealand to the Northern Hemisphere, Bundee Aki was both relatively young and inexperienced, having played just two years of Super Rugby before pitching up in Connacht.

It’s hard to credit now, given he has become the standout player in the Guinness Pro12, but Aki struggled in his first season.

1 Coronavirus: 396 more cases as public is urged to help protect ‘older and vulnerable’
2 The Sack of Balbriggan: The burning of a town that shocked the world 100 years ago
3 Tour de France: Sam Bennett claims green jersey and stage win
4 Chris Johns: We’re in for a triple whammy of Covid, Brexit and the US elections
5 FinCEN Files: Dublin business features in leak of US treasury documents
6 Born to ride, born to win: Sam Bennett, the making of a green machine
7 Coronavirus: Germany and Iceland look set to be taken off ‘green list’
8 Mike Murphy: ‘I won’t do another over-70s lockdown’
9 The FinCEN files: The billion dollar a month money trail
10 I had to move back home – and I can’t stand hearing my parents’ loud sex
11 The secret to an airy and light scone with a pillowy interior
12 The five lies we told ourselves about coronavirus
13 The far right rises: Its growth as a political force in Ireland
14 The FinCEN files: Unchecked by global banks, dirty cash destroys dreams and lives
15 Prof Sam McConkey: This is the beginning of the second Covid-19 wave in Ireland
16 Cuties controversy: If you haven’t seen it, you don’t know what you’re talking about
17 Civil War rape which led to pregnancy recalled in new TV documentary
18 Lockdown measures and rising anger in Madrid as Covid takes hold again
19 Jennifer Rock, The Skin Nerd: ‘I was motivated by people’s perceptions of me as a teenage mother’
20 A look at Elon Musk’s track record ahead of Tesla’s ‘battery day’
21 David McWilliams: Johnson’s UK and Milosevic’s Yugoslavia – spot the difference
22 Coronavirus: Public health experts considered idea of moving Dublin to Level 4
23 Martin ‘seriously concerned’ at Covid complacency amid pressure over church events
24 Building bridges: How polyamory made me a better friend, lover and person
25 Life in Level 3: What will happen under new restrictions in Dublin?
26 Climate strikers plan ‘safe’ return to protests, Greta Thunberg says
27 Fintan O’Toole: It is June 24th, 2025 – and Brexit has worked
28 Facebook may pull social media platforms from Europe
29 Ireland facing at least another year living with Covid-19 - Taoiseach
30 Golf group insist they adhered to public health guidelines during Tullamore trip
31 Aldi empire wracked by family feud
32 Reborn in a barn: A farm-fresh take on rural design
33 Ginsburg’s death puts spotlight on US supreme court’s shortcomings
34 ‘I felt like I was just an incubator for Tusla’
35 Dublin will need a rescue plan after these new Covid-19 restrictions
36 Lance Armstrong’s latest move serving him well on many fronts
37 My 15-year-old son has developed unusual obsessive behaviour
38 Keith Duggan: Surreal story of John Delaney needs to act as a wake-up call for FAI
39 Wife not entitled to deceased husband's entire estate, High Court rules
40 Blanchardstown, Tallaght top table for highest Covid-19 rates
Real news has value SUBSCRIBE