Leinster lock’s offloading game, as well as his tackling, has consistently improved 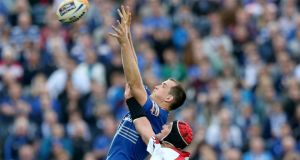 Leinster’s Devin Toner in action against Ulster in their RaboDirect Pro12 play-off semi-final at the RDS earlier this month.

“Toner in the secondrow will ensure that they get the ball.” That sort of talk goes all the way back to Gary Ella discussing the Ireland schools’ chances against Australia in 2004. Toner was 17.

It wasn’t until last season that people finally began to see past his height. And still, selection for Ireland in November was viewed with scepticism. A stop gap until Donnacha Ryan regained fitness. The public wasn’t sated by 11 tackles against Samoa, mainly because Australia was such a washout for every Irish forward.

Black Sunday came next. There remains a strong argument that he outplayed Paul O’Connell, for at least an hour. He was beating his captain to the tackle and the carry. He made 12 tackles and carried eight times in the epic defeat to the unsmiling giants of world rugby. O’Connell made the same number of effective hits but only three carries.

“I’d love to be involved, I’d love to get a couple more caps,” Toner said last October. “I think it stands to me that I can call lineouts.”

The Ireland lineout has become a fearsome, unpredictable weapon again. He proved his worth as an international lineout operator on last summer’s tour of North America. When it got messy he simply called everything on himself. To ensure Ireland kept the ball.

But an offloading game was added to the arsenal as well, which he credits a lot to Hines’ influence. The gnarled Australian nomad also showed him the art of subtle belligerence, which is an essential trait for longevity in the row.

The double figure tackle count for a lock is some standard to maintain. Into the Six Nations he went, making 10 tackles against Scotland, with a perfect lineout return and one turnover. For Wales he slipped to just nine tackles but threw an offload into this performance.

At least the lineout was flawless.

People were getting excited. Typically, over excited. During the fortnight lull between Twickenham and Italy, Ireland forwards coach John Plumtree was asked if Toner was world class.

“I thought there were some elements of Dev’s game where people might have pigeon-holed him as a lineout player, he’s bringing some real value to us,” Schmidt interjected. “I guess Plum you’d have a perspective there?”

The same Plumtree who has seen his Natal Sharks lineout picked apart by Victor Matfield and brutalised by Bakkies Botha.

“World class? Not there yet.”

Italy is always a different type of test. Ryan and Mike McCarthy were fit again, Iain Henderson was pelting up the rails but Toner was a fixture now for both the coaches and the public.

In Paris he did what everyone else did; fought like a lion then clung on like a badger. Eight tackles, two offloads, a busted nose and played to the beautiful death.

“I’ve been getting used to playing 80 minutes this season and when I saw Hendy come on for Pete, I thought, ‘That’s 80 for me so’.”

His durability is entering Jamie Heaslip’s stratosphere. It helps that he was put through the rigors of back-to-back 30 game seasons in 2011/12 and 2012/13.

The best 80 minutes we’ve ever seen from him in a blue jersey came against Ulster in the Pro12 semi-final. Wonder what Plumtree thought of it.

Tomorrow’s final against Glasgow will be his 20th outing for Leinster this season. It will almost certainly be his 16th 80-minute run. That will probably be followed by two more caps in Argentina to bring his tally for the season to 10. He had just five 12 months ago. He will be 28 soon.

“My personal goals?” he said in October. “Get a couple of more caps for Ireland. I want to nail down a starting role in Leinster. So far I have been doing that.”

1 Simon Zebo: ‘It’s been tough not being able to put my hand up to play with Ireland’
2 Pat Critchley: ‘You teach or coach the person first and the subject or the game second’
3 Matt Williams: The economic earthquake for European rugby is coming
4 Cheltenham faces criticism after racegoers suffer Covid-19 symptoms
5 Premier League 2019/20: End of season (for now) report card
Real news has value SUBSCRIBE

Sideline Cut: The fascinating final chapter in Tiger’s tale left in limbo for now 11:06
Simon Zebo: ‘It’s been tough not being able to put my hand up to play with Ireland’ 08:00
Matt Williams: The economic earthquake for European rugby is coming 07:00
Sporting Poetry: Seeing far beyond the scoreboard 06:00
Premier League 2019/20: End of season (for now) report card 06:00
Here is your handy guide to sport on television this week