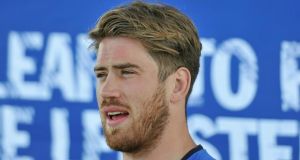 Dominic Ryan will captain Leinster in their friendly against Ulster on Friday night. Photograph: Sportsfile

Dominic Ryan will captain Leinster against Ulster on Friday night as the Leo Cullen era begins at Ravenhill.

Backrow Ryan is one of three Ireland internationals selected by the new head coach, along with Noel Reid and Jamie Hagan, as preparations for the new domestic season continue without the core of players currently in Joe Schmidt’s World Cup squad.

Reid joins up with Ben Teo’o in a strong midfield partnership, while last season’s joint-top try scorer Daragh Fanning is joined in the back three by UCD and academy players Adam Byrne and Billy Dardis.

With Marty Moore and Tadhg Furlong both ruled out of the fixture a third academy player, Peter Dooley, starts at loosehead alongside Hagan and James Tracy.

Cullen is taking an extended 33-man squad north to face Neil Doak’s side and among the travelling party are summer signings Isa Nacewa and Royce Burke-Flynn.

The Leinster bench will be confirmed prior to kick off.