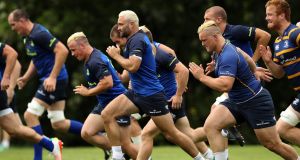 Dave Kearney (centre) at Leinster training. A scan the night before the tour to South Africa put paid to his summer involvement with Ireland. Photograph: Ryan Byrne/Inpho

After a summer of frustration, these weeks were designed to be a time for both Dave and Rob Kearney to sharpen their games and look towards European and international rugby before Christmas.

At the beginning of June the two were forced to withdraw from Ireland summer tour to South Africa after picking up injuries. Dave suffered a grade-two calf injury in the Pro12 final and his place on the plane went to Ulster wing Craig Gilroy.

Rob suffered a hamstring strain while running in a training session and was replaced by Connacht fullback Tiernan O’Halloran. The two brothers were left to a summer of contemplation.

Now Rob has come back and gone again, downed by a knee injury sustained against Glasgow last week. But Dave hopes, expects to pick his way towards a regular place in the Leinster starting side and also capture the eye of Joe Schmidt.

“It all happened pretty quickly, I literally went in on the day of the tour and got my gear and as I was heading up to my room I found out the results of the scan I’d had the night before and I couldn’t go,” says Dave of his empty summer.

“Rob did his the next day, so it was a bad time of it. But it’s a new season now, a fresh slate and I’m looking forward to it.”

With Graham Henry making a pit stop at Leinster in early August and Stuart Lancaster subsequently signing up as an assistant to Leo Cullen after the departure of Kurt McQuilkin, the beginning of the season has been anything but routine.

Lancaster has arrived with the baggage of England’s early World Cup exit at the group stage and the vapours of a poisonous fallout. In the player’s minds the history is secondary to his experience of coaching at England level and with England players.

Lancaster is also not just the defence coach. That is clear.

“Losing Kurt, we didn’t get a chance to do as much defence as we would have liked to,” says Kearney. “Stuart came in and helped us in that area. He focused more on defence and obviously came in a bit in attack as well.

“He’s senior coach, he’s not just defence. He’s going to help with attack as well, what all coaches do. They come in and work on breakdown as well, everything really.”

There is a sense too that Lancaster is changing things and Leinster are accommodating that match by match. Kearney is pleased with the influence so far. Finding the ball coming to him wide is all a winger can ask.

“It’s probably not as hard as you’d think,” says Kearney of the Lancaster influence. “Once everyone buys into the new set-up and what we’re doing, it makes it easy. Obviously, it’s not going to happen in a couple of days, but even after one week and one game you can already see an improvement.”

There’s a case of ‘they would say that wouldn’t they’ with the players and coaches on the same hymn sheet. Scrum coach John Fogarty sees a reservoir of experience to be tapped this week before Edinburgh on Friday.

“For me, my initial thoughts were, ‘Happy days’,” he says. “I’m excited to have that type of experience with those types of players that he’s coached, in a country that demands huge amounts. There is huge pressure in that job and the experience that he has.”

For now, though, it’s the old hoary chestnut of the brothers staying fit and staying on the pitch. For now, bread and butter rugby but with champagne hopes.