Callow Leinster face an uphill task against Dragons in Wales 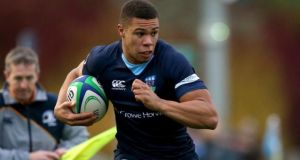 Number crunching highlights the magnitude of the task facing Leinster as they look to clamber to the top of the Guinness Pro12 in the inhospitable surrounds of Rodney Parade.

Leinster coach Leo Cullen is without 30 players, the squad seriously weakened by Ireland senior and Under-20 squad considerations and injury.

The province is leaning heavily on the academy and also the experience that some of the younger players have gleaned from the British & Irish Cup. This match represents the next stage in their development and Cullen will now far more about his charges in the aftermath as they take on a Dragons’ team that is a closer approximation of a full strength side.

Byrne, a regular try scorer for UCD and the Ireland Sevens side, gets a chance to measure up against Wales international Hallam Amos, released to the Dragons side to get some game time after injury, ahead of the Six Nations Championship.

Garry Ringrose, who celebrated his 21st birthday during the week, rekindles his midfield partnership with Te’o, while the talented Cathal Marsh, introduced early on as a replacement for Jonathan Sexton against Wasps last weekend, will be hoping for a better platform to try and manage the game. Ian Madigan is among the replacements.

Hayden Triggs has recovered from ankle surgery and partners the promising Ross Molony in the secondrow while Peter Dooley, name-checked by Joe Schmidt at the Six Nations launch in London, joins James Tracy – he’s been excellent this season – and Michael Bent in the frontrow.

Dan Leavy is another excellent prospect who has been blighted by injury a little and he’ll be looking to put down a marker in what is a very competitive position.

The Dragons are missing a handful of front-liners and are coming off a pretty heavy thumping by the Sale Sharks in the European Challenge Cup but they have qualified for the knockout stages of that competition. They’ll relish a tilt at this young Leinster pack.

Leinster will need to be strong at the set piece and the value that the young props will have gleaned from playing against a variety of body shapes from the English Championship in the B&I Cup may stand to them.

The Dragons are at home and despite three defeats in their last four matches and the fact that they are languishing second from bottom of the Pro12 table, they start as four point favourites.

For all they have achieved in compiling an unbeaten run in the league in recent times, a victory at Rodney Parade with this young team would compare favourably with any of the previous seven wins.