Only 12,000 tickets have been sold ahead of do-or-die clash with Ospreys 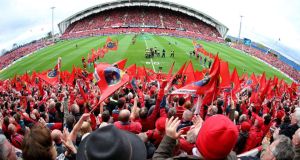 For the Thomond Park x-factor to come into play on Saturday, Anthony Foley admits there will need to be a good deal more supporters in situ come the less than ideal 2.30pm kick-off.

Time was when the prospect of an end-of-season play-off at Thomond Park would have whet the juices like no other fixture and next Saturday’s Guinness Pro12 semi-final will tell a tale.

Munster make a welcome and somewhat overdue return to their Limerick citadel for their meeting with the Ospreys, and with their season to some degree hanging in the balance, the game is also something of a litmus test for Thomond Park itself.

Time was when the Limerick ground would have been considered an impregnable fortress but at the end of last season and beginning of this, Munster lost four out of five matches there to Glasgow, Ulster, Edinburgh and the Ospreys – with just one win against Zebre – as the venue became somewhat over-used while Musgrave Park in Cork underwent its refurbishment.

Now that the latter has re-opened for business, Thomond Park has become somewhat under-used. This is only the second game there since January, and as of yesterday 12,000 tickets had been sold. For the Thomond Park x-factor to come into play on Saturday, Anthony Foley admits there will need to be a good deal more supporters in situ come the less than ideal 2.30pm kick-off.

“Firstly, people have to come,” he said after overseeing training at the ground yesterday. “You have to have a certain amount of the crowd here. Munster supporters in this region will come out and support us and they’ve done it against any team we’ve played here.

“Thomond Park is literally just a pitch and a stadium. What made it special was the people in the stands and in the stadium and the atmosphere they brought with them that allowed us to feed off them. They set off us as well and I suppose there was a bit of mutual respect there.

“They knew how important it was for us to win for Munster and they came along and supported us. I think from there, great days and great nights were grown. I don’t think you can plan them particularly in Thomond Park.

“From my end, the great days we’ve had here have been on the back of players going out on the pitch and doing their bit, and giving us a hand out there. Throughout the years, the supporters were there for us. Hopefully we see the same on Saturday.”

Earning home advantage by the narrowest of margins understandably drew a huge roar from the Musgrave Park crowd last Saturday and in 10 Pro12 semi-finals to date there have been 10 home wins.

Yet if any team is capable of ending that sequence it is the Ospreys who, aside from triumphing at Thomond Park this season, have won two away finals, both against Leinster at the RDS (in 2010 by 17-12 and in 2012 by 31-30).

While identifying Alun Wyn Jones as a “stalwart” who along with Justin Tipuric is hugely effective at the breakdown, once again Foley highlighted the Ospreys’ “dynamic” halfbacks Rhys Webb and Dan Biggar – “both equally capable of kicking, both equally capable of running and putting other people into space”.

Recalling the 8-0 penalty count against them when Marius Mitrea was the referee for the Ospreys’ 26-12 win at the Liberty Stadium in early March, and mindful of the 13 penalties conceded as things became loose in the 50-27 win last Saturday against the Dragons, Foley also cited the need to return to the six, six and five penalty tallies of the previous three games.

“Look he’s one of the best referees in the world game at the moment, he refereed the European Cup final, he gets the big fixtures, he won’t be worried about refereeing a Welsh team in a semi-final, he will get on with his job and make sure that it is done to the letter of the law, we’re all very confident that will happen.”

Still, Owens will be assisted by Leighton Hodges and Ian Davies on the touchlines and you’d have to wonder if an Ospreys-Munster semi-final would be entrusted to a team of Irish officials.

Foley sounded reasonably encouraging about the prospects of Duncan Casey and Simon Zebo returning from back injuries after taking part in non-contact training yesterday. Ditto Peter O’Mahony (hip), who did some rehab although he appears to remain the most doubtful and a clearer indication won’t be forthcoming until tomorrow.