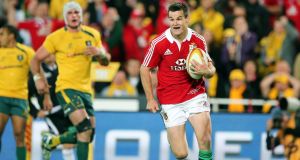 Jonathan Sexton scores a try for the Lions against Australia in 2013. Photograph: Dan Sheridan/Inpho

Warren Gatland will need to see Johnny Sexton string a number of games together and show his fitness or he will be left at home when the Lions tour New Zealand this summer.

Gatland, speaking at a promotion for sponsors Land Rover in London, discussed Sexton’s struggle with injury and was asked if there was a chance he may be left behind because he hasn’t had game time.

“Yeah,” said the Lions head coach. “Absolutely there’s a lot of competition for a lot of places. I’ve reiterated and stressed what a quality player Johnny is. He’s got ability to come back into a side.

“He’s going to be pretty important for Ireland later on in the tournament and Joe [Schmidt] was cautious last week in that he probably could have played. Players had an opportunity against Italy, which was a very good performance from Ireland.”

Evidently in contact with the Ireland coach, Gatland expects to see Sexton play some part in the Six Nations but emphasised that the New Zealand tour will be attritional.

“Joe is probably thinking another week and perhaps given him 40 minutes 45 minutes and then start looking at the last couple of games in the championship,” added Gatland.

“Johnny is well aware. It’s not just Johnny, there are a number of players . . . The last thing I want is to make a big issue of it. You guys want to create headlines. Johnny Sexton it is a nice story for you.

“He’s a world-class quality player and I want to see him back on the field. They’re taking the right steps at the moment, being precautionary and making sure he is 100 per cent right. I’m hoping he puts a few games together . . . he’s well aware of that.

“The key is trying to hold the body together. Players are going to have to be physically pretty versatile as well. It’s going to be a pretty attritional tour. Hopefully we can keep players of real quality fit. We are going to pick up injuries in New Zealand.”

Gatland added it would not just be his judgment but a collective decision among the coaches when it comes to picking the final squad.

“I want to make sure I keep an open mind when we come together as a group of coaches,” he said. “I will have the final say but it won’t be solely my selection. Everyone will have a massive input.”