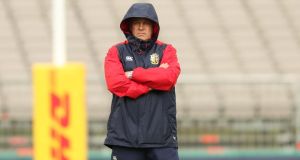 The All Blacks expect Warren Gatland to stick with his familiar tactics. Photograph: Billy Stickland/Inpho

Thursday’s front page of the New Zealand Herald probably summed up the phoney war to date as well as anything. To the backdrop of a picture of Warren Gatland exchanging a ‘hongi’ with a Maori elder, the accompanying headline read: “Welcome Home . . . don’t get too comfortable!”

Indeed. Well versed by their Kiwi head coach, the Lions have been dutifully respectful of all the sacred New Zealand customs and culture they have encountered to date, and will continue to do so, with no special plans for the haka other than to face it respectfully.

The hongi is a traditional Maori greeting in New Zealand. It is done by two people pressing their nose and forehead together at the same time, and it was part of the powhiri which greeted the Lions on arrival off the tarmac in Auckland Airport on Wednesday.

In response, the Lions’ squad sang the Welsh hymm, Calon Lan; the product of their evenings spent in choir practice and willingness to learn the words of their four anthems as well as lineout calls and everything else they’ve been cramming into their schedule.

So far, so good. Everywhere you go you are reminded of the vast scale of the Lions’ juggernaut, even compared to Clive Woodward’s size-is-everything odyssey of 2005, and of the sharp contrast to that flawed undertaking.

This 41-man squad, and their back-up army and subsidiary staff associated with their six main commercial partners, is not that far off the 2005 model actually. The Lions set off on Monday morning. Despite setting off on Monday evening, some of the us in the media corps completed the 24-hour plus trek from Dublin to Auckland and landed three hours before the Lions on Wednesday morning, because they had stopped off in Melbourne for a night in a proper bed.

This was supposedly to help them overcome the jetlag, and you hope it did, for this remains, as always, a killer. You’d pay for a night’s unbroken sleep. Much like the stopover in Hong Kong four years ago, where one of their other partners, HSBC are based, the Melbourne stopover didn’t have anything to do with Qantas being another of those commercial partners. In any event, the bean counters will have been happy with the pictures of the squad posing in Melbourne airport along the length of the entire staircase from their red-painted Qantas airplane which also adorned Wednesday’s Herald.

Despite an almost constant media glare, which he has happily accepted, and his customary willingness to talk straight, Gatland hasn’t hit one bum or sour note yet. Hence the guarded warmth of the welcome. So far.

This must bother some of their media, and even Steve Hansen, slightly. The All Blacks coach did grant some telephone interviews with English newspapers to coincide with the Lions arrival, and there were a few barbs, such as the Lions leaving their arrival so late, amid a hint that this was to accompany their traditional farewell banquet in London last Sunday night. And Hansen also suggested that unless Gatland had a coaching “epiphany”, they had a good idea what to expect from the Lions, albeit they’ll wait and see how the tourists go in their opening matches.

There will, most likely, be plenty more where that came from, notably in the week of the Maoris-Lions match, when the All Blacks will be in camp to prepare for their warm-up match against Samoa the night beforehand.

But it was so much easier to take an instant dislike to the Lions of ‘05 under Woodward, not least with Alastair Campbell in tow as well. It saved time and energy. It was like a red rag to a bull, and after the Campbell and Woodward-led handling of Speargate in the first test, it remains probably the only rugby match in history where the winning team were the ones in vengeful mood a week later. Cue Tana Umaga’s expletive into the camera straight after the full-time whistle and the 33-poont masterclass by Dan Carter in what was probably the finest performance by an outhalf ever.

So the Lions of 2005 were, in the end, gleefully mocked. But the New Zealand rugby public are funny people. They’re way more engaged when there’s a real contest. Blood sports would never work here. Thus, for all the charm offensive off the pitch, the tourists also need a convincing opening win, or two, or three, to generate more respect from a home public whom one suspects remain largely sceptical that they be a real challenge for their back-to-back World champions.

After the glorious autumnal sunshine of Wednesday and Thursday, Friday provided the more familiar sight of almost biblical rain in the north island of the Land of the Long White Cloud. On the three hour drive to Whangarei, the water to the side of the road was such that you could have paddled a canoe for long, long stretches.

We were hosted by Scotty Stevenson, the Sky Sports pitchside interviewer, in McLeods Pizza Barn in his home town of Waipu, a coastal holiday town in Bream Bay, whose Scottish heritage is so strong that Waipu hosts an annual Highland Games every New Year’s Day. The rain didn’t relent at all on arrival at our motel on the outskirts of Whangarei.

Christ College is the alma mater of aforementioned Carter. And so the machine keeps on chugging.