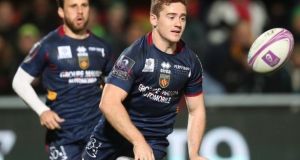 Paddy Jackson had his contract with Ulster rugby cancelled in the wake of the Belfast rape trial, at which he was acquitted, and later moved to play in France. Photo: Billy Stickland/Inpho

The makers of Guinness have confirmed they are to meet officials from London Irish rugby club to discuss their concerns over the recent signing of Paddy Jackson, the Irish player acquitted of rape last year.

Diageo, the drinks company, said it had “serious concerns” regarding the development but did not make any reference to its lucrative sponsorship deal with the club.

“We are meeting the club this week to discuss our serious concerns regarding their decision, which is not consistent with our values,” Diageo said in a statement released on Monday.

In a statement on Monday evening, London Irish said the club’s management “were aware that Diageo would be releasing a statement regarding the meeting scheduled for this week.

“ There has been ongoing dialogue with all of our sponsors regarding the Paddy Jackson signing, as part of our continued commitment to work closely with all of our partners,” a spokesman said.

Last month, the club said it had no concerns about its decision to sign Jackson, noting he was among the best “10s” in the world.

“We’ll judge the man when he’s here and the way he conducts himself but I’m fairly sure we’re comfortable with who he’ll be,” chief executive Brian Facer said last month.

Guinness has been associated with London Irish since 1992, making it the club’s “longest standing sponsor to date”, according to the club’s website. “They are truly a part of the London Irish family.”

The Diageo statement follows a move by former sponsor Cash Converters, which recently discontinued its relationship with the club.

In a statement earlier this month, London Irish said: “The club would like to clarify that the decision to part ways at the end of 2018/19 season was made before the announcement of player signings in May 2019, and for reasons unrelated to player signings.”

However, while not referencing player signings or any player in particular, Cash Converters said in a social media post that it was “committed to the highest possible standards when it comes to our investments in any sponsorships and collaborations.

“As a result of a detailed and thorough review of our support for London Irish, we have decided to discontinue our association with the club.”

The sponsorship concerns arise from the level of controversy and public comment both during and in the wake of the Belfast rape trial.

Jackson and three others walked free from Belfast Crown Court having been acquitted of all charges following a nine-week trial.

Jackson was unanimously cleared of rape and sexual assault. His team-mate Stuart Olding was acquitted of rape; Blane McIlroy was found not guilty of exposure, and Rory Harrison not guilty of perverting the course of justice and withholding information.

Jackson had his contract with Ulster rugby cancelled in the wake of the trial and later moved to play in France.