Joe Tomane intent on causing a stir at Leinster 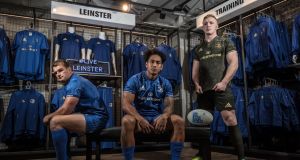 Joe Tomane sought out Leinster, not the other way round. The Wallaby wing or centre if needs must, as they surely will, was under contract to Montpellier until 2020 but the Top 14 landscape shifted under his feet.

If French Federation president Bernard Laporte gets his way, as he surely will, the clubs will only be allowed field six foreigners in their 23-man squads.

So Tomane is currently not an Australian (not unless Michael Cheika comes calling). Nor was he born in the country he represented 17 times from 2012 and into the 2015 World Cup. No, having begun life in Palmerstown North (Joe Schmidt country) the Tomanes moved to Brisbane when Joseph Malaki was a toddler.

The girth of this 28-year-old makes it believable that his professional life began as a Rugby League bowling ball. After glimpsing behind the blue curtain these past two seasons in Champions Cup games, he found himself modelling the new adidas garb (four stars and all) in Lifestyle Sports on Grafton street.

“I actually approached them,” Tomane explains. “When I found out what was happening to me in France I immediately called my agent and asked if Leinster had any spots available next year as I’d really like to go there.”

Turns out Isa Nacewa was heading home. Johnny Sexton and Rhys Ruddock will fill the leadership void, with Felipe Contepomi maintaining the high levels of rugby intellect, but Leo Cullen wasn’t going to waste a foreign contract on any thumper.

“I wasn’t meant to be on the market, having one year left on my contract, but Montpellier ran into salary cap problems and foreigner [player] problems as well so I had to leave.

“Montpellier had so many South African guys, basically half the squad were foreigners, and now the number you are allowed have [in your match-day squad] is shrinking from 10 to eight this season.”

Despite Mohed Altrad’s continual investment, the French club seems to exist in constant turmoil and they are not tuned into the family atmosphere Leinster seek to nurture in Dublin four.

It is worth noting that Tomane will not add further stress to the two from James Lowe, Scott Fardy and Jamison Gibson-Park conundrum Cullen faces every week.

“I have a Samoan passport.”

Tomane refused to be pigeon-holed into a position but the wingers – Adam Byrne, Fergus McFadden, Lowe, Dave Kearney and Barry Daly – will be on high alert. Leinster will also need a reliable number 12 at several junctures of their marathon campaign.

“I pride myself on being a versatile player who can play at a high level in any position. I’ll definitely be putting my hand up for the big games. Whatever role they need me to play I’ll do it.”

One more concern. Kane Douglas signed for Leinster before the 2014/15 season only to be lured back into the Wallabies fold as Cheika patched a World Cup panel together. What happens if Tomane tears up the European scene alongside Garry Ringrose or Robbie Henshaw, whoever stays healthy, and the Australia coach pulls the same tactic?

“I’ll cross that bridge when it comes but I am very happy here. I love being here, really enjoying my time here so far. I’ve achieved everything I wanted to achieve [in Australia] and I wouldn’t want to go back knowing I’d be getting in the way of some of the guys coming through.

“My mind right now is fully committed to being here and hopefully it can be for longer than the two seasons I have signed.”