Must-win game for Ireland against USA 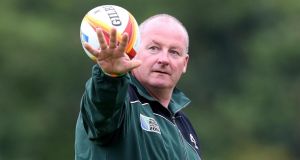 Ireland coach Philip Doyle said of the US team: ‘They’re bigger, heavier and more powerful than us’. Photograph: Dan Sheridan/Inpho.

“It’s win or bust,” said Ireland coach Philip Doyle. “A must-win game if we are to have any expectations of getting to the semi-final.” Doesn’t get much clearer than that. “The players know, we all know that to reach a semi-final we must win two games and get something out of our third game. We are going out to win all three.

“I’d like to think skill wise we are a better side. Without doubt they’re bigger, heavier and more powerful in the contact than us. It’s up to us to stop them. Our set-piece must be first class. The scrum will be damn important. They are strong, very strong.”

Ireland, however, are reintroducing an old yet deadly weapon. Tania Rosser’s return from the wilderness, usurping the always reliable Larissa Muldoon at scrumhalf, brings a new dimension to their attack.

“She always liked to set standards and sometimes pushed the boundaries too far,” said Doyle of the New Zealand-born halfback. “But she has matured, mellowed a small bit, but those high standards are still there.”

There is also the worry about this evening’s Canadian referee Sherry Turnbull, who sin-binned Lynne Cantwell and Heather O’Brien, seemingly for legal rucking, against England last February.

“We had terrible problems at the breakdown area that night,” Doyle admitted. “We have had a coaches meeting with the head referee and hopefully that interpretation has improved. Because if she refs the way she did against England we are in for a horrific day. We really couldn’t get to grips with her in Twickenham.”

So, presuming the set piece supplies enough possession and Niamh Briggs lands her goals, Ireland can win. But it might come at a cost.

1 ‘For 25 minutes I ran out of oxygen’: Pepe Reina on his coronavirus battle
2 ‘This is sick’ - seventh-tier Swedish club cancels friendly after betting mayhem
3 America at Large: On Long Island, longing for a return to our field of dreams
4 Woods and Mickelson to play coronavirus relief match – reports
5 Karen Robinson Walton: I am looking at him. I say ‘Benjamin, what have we done?’
Real news has value SUBSCRIBE