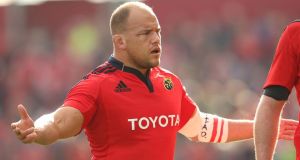 Munster BJ Botha is out of action for four weeks with a knee injury. Photograph: Billy Stickland/Inpho

Munster prop BJ Botha is expected to be sidelined for at least four weeks with a medial ligament injury.

The Grade 2 tear was sustained in the friendly win over London Irish at Musgrave Park last Friday.

The South African will, therefore, miss the Friday’s opening RaboDirect PRO12 league fixture against Edinburgh on Saturday Musgrave Park (7.15pm), as will Andrew Conway and James Downey, and most likely the subsequent trips to Zebre and Treviso, as well as the visit of Newport Gwent Dragons.

Wing Conway suffered a dead leg the week before last against Gloucester, while Downey is continuing his rehab on a quad tear. Felix Jones (shoulder) and Luke O’Dea (wrist) are also continuing their rehabilitation, while Conor Murray, Paul O’Connell and Simon Zebo have stepped up their pre-season training.

Rob Penney will, however, have centre Ivan Dineen back at the weekend, it seems, after he was forced out of Friday’s game against the Exiles having taken a knock to his calf. He returned to full contact training today, along with Keith Earls, who has been recovering from a shoulder injury.

A number of returning internationals should be available for consideration this week, according to the province.