Munster challenge is to turn Clermont strengths into weaknesses 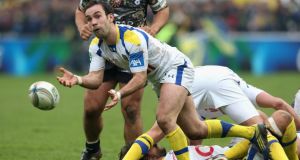 With a gentle 39-17 victory over Top 14 champions Toulouse last weekend, Clermont certainly looked unbeatable. But muscle has a memory and crucially, Munster know how to win.

I say this cautiously as a lot also centres on Clermont’s knowledge of losing – to the Irish. Those memories will be a huge motivation tomorrow.

What do we know? Peculiarly, off defensive lineouts Clermont tend to leave little scrumhalf Morgan Parra as last man on that touchline. This is ripe for Munster to set up an attack down the traditional outside channel – but not taking the ball into contact and rewinding quickly with wide flat passes to get Simon Zebo running at Parra!

In other words, Munster have to turn an extremely brutal and miserly Clermont defence into a positive and to do so they must understand and execute with total focus, turning Clermont’s strengths into weaknesses.

Munster have many brilliant traits but backline attack is not currently one of them. Hence, they must unlock the old school areas where, for instance, Wesley Fofana and James Downey couldn’t be more different.

Clermont’s scrum, with Nathan Hines behind the tighthead prop and Jamie Cudmore on loosehead is very strong. However, several times Hines, possibly overused by a powerful Clermont unit, scrummed very high, depowering the tighthead and exposing Clermont to a counter-drive on their own ball.

Conscious of Clermont’s attacking ability, Munster may fill the field defensively with numbers by sacrificing the breakdown ball. Conversely, Munster chose to bully Harlequins at the breakdown and reaped huge rewards.

More challenging
This balance is far more challenging against Clermont where, for example, off a left-hand ruck 30 metres from touch on Leinster’s 50-metre line, Clermont attacked six-on-six, which became three-on-three. Sitiveni Sivivatu slipped through, offloading to Lee Byrne, who put Napolioni Nalaga flying as Leinster scrambled back just two metres from home.

Parra then found Fofana for the crucial try.

Fifty metres were covered in a channel of seven metres with a perfectly placed defensive Leinster line of equal numbers. This was brilliant play from a brilliant team against a brilliant defence but with only one tiny error as the volume of options transfixed the defence.

The breakdown will be so much tougher than in the Stoop as Clermont work through and after the tackle like no other team, making life very difficult for all comers, and outstanding backrow breakdown play from Munster will be more important than ever.

Clermont are also brilliant at working over the ball, which sucks in defenders but also keeps pace on their recycle.

They also have no issues going into the air, where they are every bit as good as Munster. Byrne loves to counter and is comfortable in the knowledge the beasts on either flank can bail him out of trouble.

Consequently, his counters are far more potent than Harlequins’ Mike Brown, who ran into a Munster trap.

Like Ulster’s Ruan Pienaar, Parra is the brains behind the brawn but he has massive power outside. Watch their lineout tail pod crossing over the 15-metre line with a pop down to Parra, who will always have Sivivatu on hand to maximise any leaks. Then there’s Aurelien Rougerie running off his backrow, offloading to Sivivatu, to Byrne to Julian Bonnaire – it’s endless!

Ruled out
One unexpected bonus for Munster is the news that Clermont’s formidable South African backrow Gerhard Vosloo has been ruled out with a hamstring injury, as has their towering centre Aurelien Rougerie.

For those unfamiliar with Vosloo, he is extraordinary, notable for his brutal force around the tackle and ball-carrying. He is that good and possibly their most important player. A huge loss for them.

In defence, Munster must adapt to the various depths of the Clermont attack, but especially when Parra gets into his rhythm as his big men are so comfortable taking on the gain line and taking contact and offloading through that contact. Hence Munster have no choice but to fly up, attacking the first receiver.

Munster can get between Parra and ball receiver to unsettle.

Alos, the pressure of failure in the Heineken Cup allied to a home fixture can’t be an easy burden and the Clermont lineout is suspect, with Bonnaire crucial.

The challenge for Munster is to engage the Clermont strengths without being swallowed up. Punchy ball-carrying will eke out yards. Any one of the Munster backrow can do it but I’d love to see Peter O’Mahony build more sophistication into his carries.

The barnstorming stuff is brilliant but real understanding of spatial conditions to unearth opportunities would push him to a new level. In the meantime Munster need hard yards gained.

And Paul O’Connell taking flat out offloading before contact to a hard support line would be nice.

Weathering the early Clermont storm is crucial and Ronan O’Gara will have to take the sting from Clermont with controlled patience and field position. Conor Murray inside him must repeat his Stoop performance, taking many uncomfortable hits to question the Clermont fringe.

Facing such attacking variety is a huge challenge, the answer for Munster lies in finding the balance between tending to the breakdowns and filling the pitch.