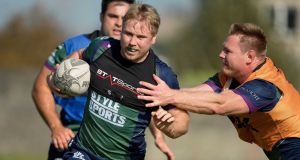 Ireland’s victory in the first leg of the Rugby Europe Sevens Grand Prix series in Moscow at the weekend has allowed them to take a significant step forward in trying to qualify for next year’s Sevens World Cup in San Francisco, and also potentially a place in the repechage tournament at the 2018 Hong Kong Sevens.

The Rugby Sevens Europe Grand Prix circuit is divided into three tiers. The Anthony Eddy coached Irish side won Tier 3 in 2015, triumphed in Tier 2 last year, and are now competing at the top level in Europe, one step below the World Series circuit.

In winning in Moscow, the Irish Sevens squad beat Russia in the semi-final and Spain in the final, both of whom have previous competed on the world circuit.

The first goal is to gain a place at next year’s repechage in Hong Kong, where teams will compete for a place on the 2018/19 World Series. They can gain a place at this tournament by finishing as one of the top two placed in the Rugby Europe Grand Prix (outside of those who are not already a core team on the world circuit).

The other ambition is qualification for the 2018 Sevens World Cup in San Francisco. The Rugby Europe Grand Prix offers two places to nations outside of those who are already pre-qualified from the standings at the 2013 Moscow World Cup or via this season’s World Series.

The European sides who have already qualified are England, Wales and France, while Scotland look set to gain a spot via this season’s World Series. Russia are the only European side on the world circuit who are outside of automatic qualification, so they, along with the likes of Spain, Germany, Portugal and Georgia look set to be Ireland’s main competition for the top two places.

Ireland did lose to Germany in the pool stage in Moscow but recovered to cover the remainder of the tournament unbeaten and claim the title. The squad travel to Lodz in Poland for the second leg of the European series this weekend.

They enjoy a three week break then before resuming their quest in Clermont on July1st-2nd and then travel to Sandy Park, the home of the Exeter Chiefs for the final leg of the European Sevens Grand Prix on July 15th-16th.

Fionn Carr (Naas): Connacht’s all-time leading try scorer, he is back playing club rugby with the John Murphy coached Naas, his home club. He was excellent in the final win over Spain.

Jordan Conroy (Buccaneers): The young wing scored 19 tries in helping Buccaneers to qualify for the Ulster Bank Division 1A next season. He was voted Connacht club player of the year.

Billy Dardis (UCD): The former Ireland Under-20 fullback has been unfortunate with injuries over the past few seasons but at his best the UCD student is a fine footballer.

Ian Fitzpatrick (Lansdowne/Leinster): The Leinster Academy and Lansdowne wing is another to have spent some time on the sidelines with injury but possesses the pace and footballing skills to excel.

Hugo Keenan (UCD/Leinster): He was an integral part of the Ireland Under-20 team that reached the Junior World Championship final before losing to England last season.

Terry Kennedy (St. Mary’s College/Leinster): A son of former international Terry, he once scored six tries for the Ireland Under-20 side against a Leinster Development team.

Mick McGrath (Clontarf): He played at senior level for Leinster, was part of a wider training group with the Leicester Tigers last season for a time and is an All Ireland League winner with Clontarf.

Harry McNulty (UCD): The Bahrain-born, former Munster academy player has been a regular on the UCD team for a number of seasons and has been a central player for the Irish Sevens since the abbreviated rugby sibling was revived.

Mark Roche (Lansdowne): A former Ireland underage international at various grades he has been a regular member of the national sevens team.

Nick Timoney (QUB/Ulster): Educated at Blackrock College, a former underage Irish captain and current member of the Ulster Academy, he has also played at senior level for the province.