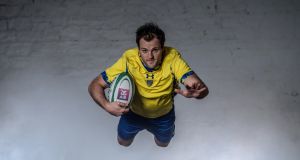 Donegal footballer Michael Murphy did not look out of place while training with rugby side Clermont Auvergne, according to the French club’s former England internationals Nick Abendanon and David Strettle.

The 2012 All-Ireland winning captain spent last week with the Champions Cup quarter-finalists as part of The Toughest Trade TV series, which will also focus on how ex-Wales wing Shane Williams got on at Murphy’s club side Glenswilly.

Abendanon felt Murphy acquitted himself well at the Stade Marcel-Michelin.

“He didn’t look out of place at all in any of the training sessions we did,” Abendanon told The Irish Times. “He’s obviously very well athletically built. He was there or thereabouts in terms of lifting the same weights as us in the gym.

“I was pretty impressed with his speed. He seemed pretty quick in his agility off the mark . . . you wouldn’t be able to tell that he was actually an amateur.”

That view was shared by Strettle. The former Harlequins and Saracens wing said Murphy had “got stuck in” to contact sessions with academy players and that the Donegal star’s skill had stood out during workouts with the first team.

“Definitely – his kicking and his catching,” Strettle said. “Especially being a back-three player, you do appreciate somebody who’s obviously got a good catch on them.

“We were doing some high balls in one of the training sessions and you can see the skill set that the boys have so it’s definitely impressive.”

Strettle realised soon after Murphy’s arrival that he had already heard of the player’s past achievements. The 33-year-old was still at Saracens when former Donegal manager Jim McGuinness gave a talk to their squad ahead of a 2015 European semi-final against Clermont.

“It was quite interesting chatting to Michael,” Strettle said. “I didn’t realise that the town that you’re born in, that’s the team you play for, which I think is amazing. I could just imagine the unity that builds in a team.

“We’re very lucky because we play sport for a living and we end up becoming good mates with our team-mates and our colleagues and we win things.

“It’s really nice to win things with your mates but I can imagine if you win things with the people that you went to school with or people growing up in exactly the same village and towns as you, it must be unbelievable.”

Abendanon, who scored two tries from the wing during Clermont’s 38-19 win over Ulster in December, said some of Clermont’s foreign players had already been aware of Ireland’s national sports.

Before Murphy got to the club though, the whole squad were shown clips of Gaelic football. The commitment that he and hundreds of other top players show to an amateur game is something that clearly intrigued Clermont’s players.

“It was definitely a surprise to me,” Abendanon admitted. “Especially when he stood up in front of the whole team and went through his typical training week.

“It was only after listening to that and understanding exactly what he does in terms of the sport being amateur and the fact that he runs his own business on the side.

“And then he has to go training Tuesday and Thursday evenings, play on a Sunday and then back in the gym on a Monday morning at seven o’clock.

“You’ve got a hell of a lot of respect for these guys that they don’t get paid but they still do it and they still really enjoy it.

“We sometimes think we’ve got it hard here and we finish at lunchtime and come home and get to rest the whole afternoon. So they take it to a whole new level really.”

Strettle remembers it being tough trying to combine university with rugby when he first turned professional. But the growing demands on an intercountry Gaelic football player seem harder to balance.

“One thing which is really important to us is our downtime because we get trained really hard and we do need some time off our feet,” Strettle explained.

“But those guys don’t get it. When they’re needing downtime, that’s when they’re actually going to do their proper jobs, doing their nine-to-five work. It’s really impressive.”